Day 8 brings us back to SAGA and Amra, and to L. Sprague de Camp versus Tanith Lee. 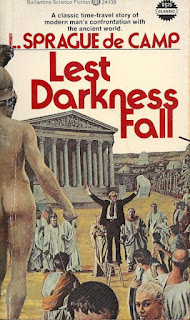 Lyon Sprague de Camp was a prolific author and important promoter of fantasy literature. He was an SFWA Grand Master in his own right, and wrote fantasy series such as The Compleat Enchanter (with Fletcher Pratt) and The Unbeheaded King. He edited four seminal anthologies that helped define sword & sorcery fiction, and was the first Lovecraft biographer. But his legacy is inextricable from the 1960s paperback Conan series, in which he presented Howard's original stories alongside pastiches by de Camp, Lin Carter, and others. There were additionally "posthumous collaborations" - where de Camp or Carter would take an unfinished draft by Howard (often not a Conan story) and complete it. The results are poor and de Camp is often judged poorly in their light. 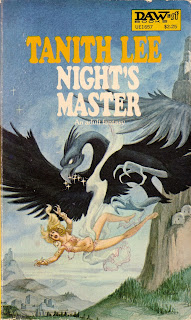 Tanith Lee was a British author who was quite new in the 1970s, and comes on this tournament strictly because she wrote a short story in Swords Against Darkness III (she had a story in every volume after the first). She was a member of the Swordsmen and Sorcerers Guild of America (the SAGA half of SAGA / Amra) and was known for her stylistically lush dark fantasy novels. Tales of the Flat Earth was one of her first and best known series, and won her multiple awards. Lee's work purposefully invokes decadence, horror, and sexuality, although not in the same ways that many of the "proper" Appendix N works would. Still, she was one of the most distinctive voices to come out of the sword & sorcery revival of the '70s.