A Missing Link: A Miniature Megadungeon

(A brief edit to note: This is officially my 300th post on this blog. Wow.)

Zach Howard at the Zenopus Archives has managed to surprise us again, this time showing the original cross-section of Holmes's sample dungeon. Take a look and come back, I'll be talking about the hand-drawn image a good bit.

This little diagram is a master class in the "megadungeon in miniature." It condenses into 3 levels most of the principal ideas that underlie the Gygaxian megadungeon. There are multiple entrances, multiple connections between levels, different types of terrain, sloping passages, and generally everything you'd want from a complex dungeon, all in three neat levels. None of which is to disregard Tom Wham's great Skull Mountain diagram, but Holmes manages to do a lot with a few levels.

We come to two entrances on separate hills. This creates an interesting choice right off the bat. There might be something low-level like goblins or kobolds guarding the hillside entrance, but the descent into the mine is obviously the deeper way down. It's a good idea to let the rumor tables give a hint that the mine shaft to level 2 is a way down to more difficult monsters than the hillside cave.

In level 1 we're about equidistant from the two ways down. The level below the ladder has one of the long, gradual slopes that Gygax was fond of, and a party may reasonably be surprised when they go up a level of stairs and are still on the second level. Holmes's original wandering monster tables, drawn from Supplement I: Greyhawk, might give us a good idea of what kinds of threats lurk in each of them. Given how many humans with levels there are, it either suggests that the dungeon has a significant human faction, or is actively plied by rival adventuring parties. Either choice is interesting.

I really love those two carved-out areas by the mine shaft. They just have a ton of potential for mischief. As soon as I saw them I was envisioning a nasty monster swooping out as the PCs try to go down (or up) the ladder and causing all kinds of havoc. Or they could be rooms that are rigged with nasty traps, maybe something explosive, or a simple arrow trap that happens to knock the PC a long way down to the dungeon floor below. Or one of them could have a treasure visible, but a monster or a trap nearby that will turn the PCs' avarice into their undoing.

The third level's relative size suggests it should be a nice, big, sprawling level with lots of rooms and interesting tricks. Then there's the cave, and I have to admit if it had a lake indicated it'd be exactly after my heart. As it stands, the cave feels like it should really be the lair of a dragon as the culmination of the whole adventure (and a justification for the game being "Dungeons & Dragons"). It would really make the whole thing a summation of D&D in three levels.

It doesn't have the domed city and the great stone skull of Wham's drawing, but Holmes's original sketch points to a dungeon that can be played in the three character levels suggested by his rule book, and still give you the megadungeon experience. There's no reason the weird and cool stuff we've talked about previously can't be on these three levels, and Wham's drawing really only gives us an extra two or three true "levels" (counting 2 and 2A, the entrance cave as "one up", and the cave separate from the third normal dungeon level). What I think using a dungeon like this does is gives just enough of the complex elements without going into "megadungeon fatigue" that modern games often run into. By the time the players are bored with runs into the same dungeon, they're finished.

From that perspective, this is the missing link between the megadungeon and the smaller types that came to dominate the scene after the mid-1970s. You could describe this in a relatively short module but have months of play material come out of it. The only published dungeon that really comes close to this is Caverns of Thracia, whose reputation should tell you how great of a dungeon I think this could be turned into.
Posted by Wayne R. at 10:38 AM 1 comment: 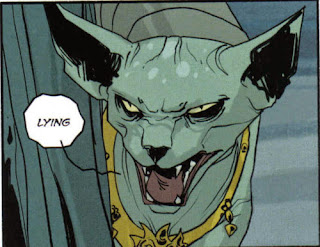 (That's Lying Cat, familiar to fans of the comic Saga.)

I was looking at Arduin for a completely different post idea, and it always brings me back to the funniest statistic in that book: % Liar. Early printings of OD&D put this instead of % Lair. Rather than go along with the errata, Dave Hargrave made this a statistic of its own. The Air Shark, the first monster in the list, has a % Liar of "Too stupid to." And that, my friends, is Retro Stupid.

But % Liar is an interesting idea for a social mechanic (the kind of thing people always say OD&D doesn't have, even though it does). It fits with the aleatoric approach to the game, where random chance is allowed to determine certain key factors. Having a % chance that a monster will lie to you is a perfectly reasonable mechanic given the way that Contact Higher Plane has a veracity percentage to determine whether the result is true or not.

What interests me is that it creates an expectation that some monsters will be more trustworthy than others. Say a goblin has a 50% liar rating while a gnoll has a 30% rating (using the actual % Lair column just for a moment). The trustworthiness of the gnoll is an interesting bit of setting-building. What is it about gnolls that makes them less likely to lie? They are considerably more reliable than a coin flip, which is what the goblins are, but there's still a real chance that listening to them will land you in hot water sooner or later.

There's even a sort of gambling aspect that could emerge from this; once PCs find a particular monster is fairly reliable, they could try to tap the well just enough, pressing their luck that this won't be the time the liar dice come up against them. The lies can also be subtle twisting of the truth, like the rumor about a trapped maiden in Keep on the Borderlands that is designed to trick PCs into "rescuing" the medusa.

This would work well with a two-column rumor table, where one side is true rumors and the other is false, misleading ones. Say a goblin has a 50% chance to be lying; you can roll it organically. If you roll a 1-10 on a d20, you check the corresponding entries on the "lying" table. If you roll 11-20, you check the "truth" table. Gnolls only check "lying" on 1-6. This lets the referee make the lies more varied; for instance, lies 7-10 might be more outrageous, as creatures prone to lie more often will have a tell. So lying rumor 6 might be that the room beyond the statue is empty, when it's actually an ogre's lair, while lying rumor 10 might say it is a dragon's lair.

NPCs could also have a % Liar. We could base it on their alignment; Lawfuls may only have a 5% chance, while Chaotics could be 40% or higher. In general it seems apt to align the percentage to alignment without getting totally out of hand, thus giving a game use to alignment aside from the ever-controversial alignment languages.

Obviously this system places a bit more of a premium on magic and items that help to detect lies versus truth. Finding out about the reputation of various creature types is also a highly useful piece of knowledge, as detailed above. If players know that it is more useful to negotiate with gnolls than goblins, it adds a new strategic dimension when they encounter the more "honest" creature type to parley instead of fighting.

Sure it's a typo, but why not ride it out and add an interesting dimension to D&D?
Posted by Wayne R. at 4:58 PM 2 comments: