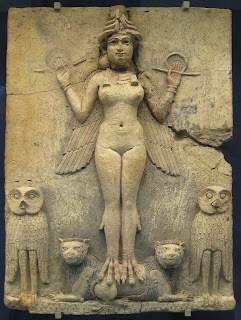 I've been reading a fascinating anthology, Myths from Mesopotamia, of stories translated from ancient Akkadian. Some of these are the well known myths of Gilgamesh and Atrahasis, which told a flood story that will be familiar to readers of the Hebrew Bible. Other stories, though, talk about the descent of deities into the mythic underworld – a long-standing interest of this blog.

There are a number of such descents. One story describes the goddess Ishtar (sometimes called Inanna) going down to the realm of her sister Ereshkigal. She threatens the gatekeeper (more on that later), and is allowed in - although only after she strips away all of her ornamentation. Then she is inflicted with a series of diseases and imprisoned. Since Ishtar is a fertility goddess, all sexual activity on earth ceases while she is trapped. Ea creates a man, called Good-Looks in the translation, to trick Ereshkigal into requesting a drink of water; this causes her to free Ishtar. The myth also involves the release (which in some other versions is only temporary) of Ishtar's lover Dumuzi.

The other stories involve the god Nergal. The myth is somewhat different in two versions, but the gist is that the gods are having a banquet, and Ereshkigal sends her vizier up to get her portion. Nergal is disrespectful to the vizier and must go down into the underworld as penitence. In one version he brings down an elaborate chair to allow him to escape, but Ereshkigal makes a threat (more later) and he has to return as her lover. In the other he is sent down as a penitent and seduced by promises of power from Ereshkigal.

So as not to bury the lede on these threats, which are roughly the same, let's go right to the source text, from the Descent of Ishtar.

Reading this, I cannot help but be reminded of the modern trope of a zombie apocalypse. The seven gates of the underworld are what protects the earth from hordes of ravenous dead. And yet this threat is made both by Ishtar and Ereshkigal in quite a number of myths. In fact we first see it in this anthology with the Epic of Gilgamesh, where Ishtar makes the same threat if she is not given the Bull of Heaven (which is promptly dispatched by Gilgamesh and Enkidu in an anticlimactic fight that many referees will find too familiar.)

It's also interesting that Ishtar has to remove her clothing and protection to step through the gates in the first place. Nergal subverts this somewhat; in one version of his myth, he dispatches the doorkeepers rather than being let in conventionally. Certainly those are ideas that can be played with in creating a D&D underworld.

One detail I found fascinating was that the inhabitants of the underworld are described as clothed in feathers, eating dust and clay, and having no offspring. This might be an interesting tidbit for those who want to avoid the D&D tropes of "what do the monsters eat" and "do we kill baby orcs?" (or more generally the idea that the PCs are invading the realms of sentient cultures). The issue of drinking water seems particularly critical, which can be interesting either as a tool or a threat to pose to the player characters in the underworld. 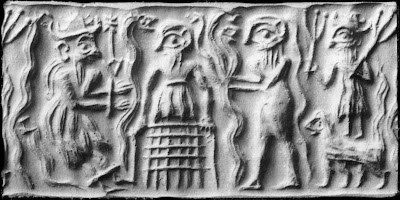 The Babylonian myths feature various demons, such as the gallu shown tormenting poor Dumuzi above. They were known as the demons that hauled the dead to the underworld. One thing we will note is that there are in fact larger and smaller demons, with their leader wielding a mace. In the Sumerian version Dumuzi's hands and feet are turned into snake hands and feet so that he can escape from them. There are some adaptations of gallu to modern versions of D&D, but they seem like a flexible race: you can run them like anything in classic D&D from a goblin to an ogre, making the bigger ones more proper dangers. And of course they could wear increasingly bizarre feathered clothing.

The last thing that I think needs to be pulled out of this is the nature of the deities in question. Ishtar was of course a major goddess of love, but also war and conquest, infamous for the practice (which may have been spurious or exaggerated) of sacred prostitution. Ereshkigal herself seems to have been principally a queen of the underworld, though it's fascinating that she unleashes disease at Ishtar and makes threats of zombie hordes. Nergal was a bit more interesting, as he is a god of war and plague, and specifically had a role in drawing ghosts back into the realm of the dead.

So if you want to make your underworld more Babylonian, consider multiple gates with sacrifices or gatekeepers; big and small demons with clothing made of feathers; and don't forget the hordes of ravenous zombies.

Images in this post are from the public domain. Sources: goddess, demons.