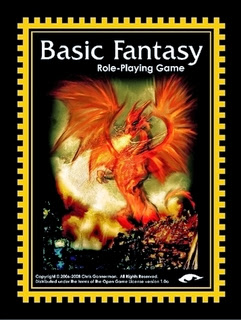 Basic Fantasy has been continuously revised and updated, even if only incrementally, for almost a decade. It's a quality open source product and its community is doing as much as any publisher out there to build old school roleplaying. It is what it says on the box: a meat and potatoes old school experience. And it deserves more acclaim than I think it gets.
Posted by Wayne R. at 10:57 AM 7 comments:

I ran another AD&D session last Saturday and it went well. I'm not going to summarize the whole game, but I do want to share a few impressions. None of these deserve their own post but together they make some observations I feel like sharing. This is spoiler-rich so my players may want to look away.

Logistics, or Sometimes You Need a Pack Goat

The players spent a lot of time on logistics. Since the temple they were exploring was up a mountain, with steps leading up to it, they couldn't bring their mule. This caused some rumination on alternatives, and the players discovered that the AD&D Players Handbook lists goats for all of 1 GP. So of course they decide that pack goats are a wonderful idea. Sadly they didn't go through with it, but it was filed away for future reference.

Since we live in a wonderful and strange world, there is a FAQ about pack goats. By my estimate, a goat should be able to carry 20-30% of its body weight, and goats tend to weigh about 150 lbs, so that'd be 30-45 lbs. Just in case you want pack goats in your game.

Also in logistics, the PCs spent a bit of time burying their coins in large metal boxes, which was interesting. Since I've used the Keep on the Borderlands so many times, PCs usually just leave money at the Keep's bank, so this was a new twist. They are lucky I'm not using the gold-spine books, because aurumvoraxes.

The Importance of Time

Some time had passed since the last time the PCs had gone to the temple. Their initial mission involved finding the priest who had gone to re-open it and his entourage. The PCs had left without finding where they were, so I decided that an aquazombie had found them instead. This led to some wonderful aquazombie encounters.

If you don't know what an aquazombie is, find Jennell Jaquays's superlative adventure "Night of the Walking Wet" from the old Dungeoneer zine. They are 2 HD creatures that replace living flesh with slime and communicate the disease with a successful unarmed attack (a save avoids this).

But I've found as a referee that I really enjoy making time count by having weird stuff happen in the dungeon when the PCs leave. After all, as Gary said, "YOU CAN NOT HAVE A MEANINGFUL CAMPAIGN IF STRICT TIME RECORDS ARE NOT KEPT. "

Dwarves and Elves are Useful

As a referee, it's much easier to describe Dyson Logos's maps if there's a dwarf involved. Since they have a great sense of elevation inside dungeons, you can just describe things to them directly - "You had gone up a hundred feet and you've come down about sixty." Makes perfect sense of things.

I missed a few opportunities in my take on the water temple to thematically unify several elements of corruption. I wound up leaving it a mystery for the players, The aquazombies should have been tied to the corruption in the secret area of the temple, then I could have had something really cool going on. That's l'esprit d'escalier, stairway wit, the great example being George Costanza's "jerk store" comeback in Seinfeld. Players always figure out things in a better way than the referee does.

Of course that's what publishing a module lets you do, so I guess I have to get to work.
Posted by Wayne R. at 9:57 AM No comments: