Day 2 of Appendix N Madness was a closer race than Day 1 as John Bellairs beat Fletcher Pratt by 59% to 41%. Bellairs will advance to face the winner of Robert E. Howard vs David C. Smith.

Day 3 brings us to the Sci-Fi bracket and pits #2 Andre Norton against #7 Sterling Lanier. 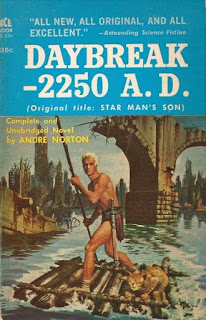 It is strange to note Andre Norton's "notable work" because she was an active and prolific SF author from the 1930s to her death in 2005. One of the pioneer women in SF and fantasy, Norton often blurred the lines, as in her Witch World series that is presumably a major reason for her inclusion. Daybreak - 2250 A.D. was pioneering in post-apocalyptic fiction. She also wrote the first AD&D fiction, Quag Keep, which is considerably less distinguished as a work. Some of her SF is really excellent examples of the genre, including the Forerunner and Solar Queen series, which make terrific inspiration for Traveller. There is even a late fantasy series written with Mercedes Lackey that starts with The Elvenbane. It's no surprise that Norton was voted a Grand Master by SFWA. 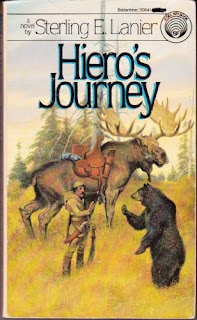 One of the oddities of Appendix N is that some authors on the list made their biggest mark as editors. It's true of Lin Carter and it's true of Sterling Lanier, who convinced Chilton Books to release Frank Herbert's novel Dune in 1965. In the late 1970s, Lanier wrote Hiero's Journey, a post-apocalyptic novel set in Canada and featuring a priest with significant psionic powers who rode a moose-horse hybrid called, logically, a morse, and it got listed in Appendix N. A sequel, The Unforsaken Hiero, continued the story but a planned trilogy was never finished. The Hiero novels lean toward Gamma World fodder. Lanier also had a Dunsany-esque series of stories published as The Peculiar Exploits of Brigadier Ffellowes.

Vote in the poll (and join in the discussion) here. A winner will be named at noon on Saturday 3/4.
Posted by Wayne R. at 12:39 PM