Day 11 of Appendix N Madness was a rout for Leigh Brackett, who will advance to take on another of Appendix N's great women, Andre Norton, in round 2.

Day 12 brings us to SAGA / Amra and a match-up between Jack Vance and Lin Carter. 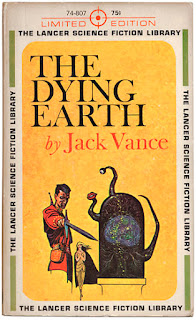 Jack Vance was a Bay Area writer best known for his Dying Earth series which collects picaresque tales of wizards and rogues (particularly Cugel the Clever) in a far-future world where technology was so advanced as to be magical. His Planet of Adventure series had elements that Gary Gygax admitted to stealing for his own Castle Greyhawk. D&D's magic system calls itself Vancian, although this is open for debate. The author himself was a master stylist, his work heavy with decadent atmosphere and rapier-quick wit. Vance was an SFWA Grand Master in his long lifetime. He wrote further works such as the SF Demon Princes and the fantastic Lyonesse series, but the Dying Earth is probably his most lasting legacy. 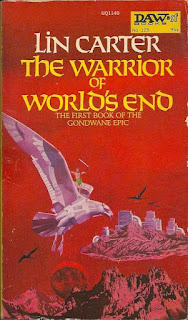 L. Sprague de Camp's protégé was a collaborator in "completing" Robert E. Howard's unfinished works, and an author of voluminous pastiche as well as original works. Lin Carter's greatest achievement was the Adult Fantasy paperback series that he edited for Ballantine, which wanted more fantasy novels after the success of The Lord of the Rings. Carter brought dozens of obscure novels to light, promoting the likes of William Morris, E.R. Eddison, James Branch Cabell, Clark Ashton Smith, Lord Dunsany, and H.P. Lovecraft. He also helped to bring up then-new fantasists such as Katherine Kurtz and Evangeline Walton. Unfortunately, none of his dying-earth work (World's End) or planetary romance (Jandar of Callisto) or lost-continent fantasy (Thongor) holds a candle to the originals he was imitating, and the reader is better off sticking to Adult Fantasy.