Some Highlights from Lulu

I always post on G+ but some readers might not be completely aware of a page I'm very intent on keeping up:

This is a long list of products that I have either bought or have a PDF from, and have curated into a list of goodness. There is a code through 11/26, TURKEY30, for 30% off, and I want to highlight some products before the holidays.

David McGrogan, Yoon-Suin.
One of the two best OSR products on Lulu in 2015. Yoon-Suin is a bunch of tables and ideas for running a sandbox campaign with some unique flavor.

Scrap Princess and Patrick Stuart, Fire on the Velvet Horizon.
The other best 2015 product. A statless monster manual full of inspired weirdness, in the style of an old zine done by pasting together.

Richard LeBlanc, CC1: Creature Compendium.
A great B/X monster manual. If Fire on the Velvet Horizon is great inspirational material, this is an excellent, practical, and non-standard monster book for your needs. (Richard also has a psionics book that I'm hoping will be available in print sometime soon.)

Simon Forster, The Book of Lairs.
A neat book of the type I've wanted for a while: just a collection of wilderness monster lairs. Each lair is a compact but usable mini-dungeon that you can put in a hexcrawl.

Those four are the best new Lulu-content over the past year, and all are well worth getting. I also would be remiss if I didn't do a little self promotion. Dungeon Crawl #2 and Dungeon Crawl #3 are still available on Lulu, as are two projects I was proud to contribute to: Narcosa and Petty Gods. Narcosa particularly is a beautiful book of literally trippy weirdness, and PG is a wonderful tome.
Posted by Wayne R. at 2:25 PM 1 comment: 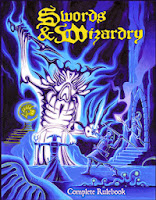 For me these differences in preparing the game show a lot of the underlying philosophy of a rule set. S&W has a lot of the exterior resemblance of OD&D, but if played as written it will have a natural tendency to drift in a direction more toward a "modern" game with a heavier emphasis on combat. Whereas LotFP, which totally upsets the apple cart of standard D&D, comes around and goes back toward exploration. It's a neat trick if you can pull it off.
Posted by Wayne R. at 10:30 AM 7 comments: