The Brave Art of Running Away 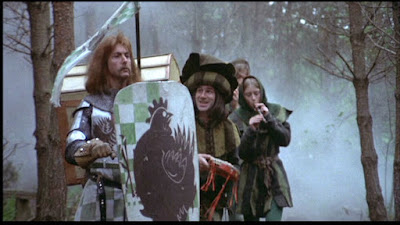 In last night's game, on two separate occasions the player characters decided that discretion is often the better part of valor, and decided not to fight potential enemies. One was a group of Selenites occupying a mine - the PCs charmed one of them and got enough information to know they'd be outnumbered. The second was a giant badger, which they were simply able to outrun (it only has a move of 6 compared to the PCs' 12). This did land them in a different fight, but they avoided the badger.

Generally I think that this is encouraged by the design of old school D&D (or in this case, S&W). PCs don't have a lot of hit points at low levels, and often don't have a lot of resources to regain lost ones other than time. It's one of the things that defines the OSR mode of play as more in the dangerous-exploration vein and less high-heroic. The PCs who emulate Sir Robin instead of Sir Lancelot in Monty Python and the Holy Grail are, frankly, more likely to survive. (Sir Robin doesn't do as well at the riddle part, another lesson for players.)

Mechanically, running away is one of the least complicated things in D&D. Movement rates are objective, and this has been true in pretty much every edition of the game you can go to. Whether it's described as 12" or 30 feet, PCs tend to move away at roughly the same speed, and monsters are either faster or slower. Encumbrance becomes important in this regard, of course, because if you are overloaded with treasure, you can't run as fast. This can set up a Sophie's Choice for the players: do you save your GP or your HP?

This is where the ethos of "free Kriegsspiel" or "rulings not rules" becomes important. For the most part, the difficulties of running away will be situational. Is it dark? Is there an obstacle or danger that the PCs can run into unawares? You may want to allow a saving throw or a d6 roll - old D&D's surprise mechanic might be a good guide to see whether the PCs land in something unexpected, or see a hazard before hitting it. Rulings may also let the PCs improvise a strategy to gain some distance, or make a mistake that allows the pursuer to catch up.

Likewise, when they flee is a good time to roll for a random encounter. With some luck, this could be a good or a bad thing. Maybe it's another hostile force (as with the bandits my players ran into); the combination of two of these may be interesting depending on your local factions. They could even get lucky and run into some relatively friendly person or creature that could help them in a pinch.

Of course, in a dungeon or wilderness, running away means taking the risk of getting lost. Almost any older D&D ruleset has rules for this in the wilderness, though you might have to improvise somewhat within the dungeon based on where the PCs are in the map. I wouldn't make this an automatic consequence, but there should be some chance of losing one's bearings, especially in unfamiliar terrain.

One factor that isn't in the rules that the referee should consider is: how long can the PCs run for? After a certain period of time, PCs should become exhausted; some kind of check, maybe a save or a Constitution roll, could be in order. As a cautionary note: one thing worth knowing about humans is that running over very long distances is a specialty of ours as a species. If the pursuer is non-human, and can't gain a decisive advantage, it will probably tire out before they do.

In itself, running away is hardly a heroic action. Players might say that they didn't sign up to play Sir Robin. But in an exploration game, picking the right time to run away is likely to be one of the things that keeps the PCs alive long enough to become the heroes.

Just be sure the minstrels don't write a ballad about that part.