David C. Smith received a single vote against 72 for Robert E. Howard, who advances to take on John Bellairs in round two.

Day 11 is for the Sci-Fi region and pits Leigh Bracket against Jack Williamson. 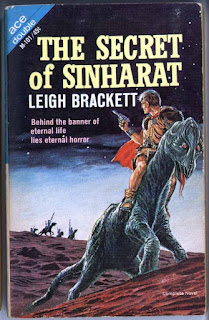 Leigh Brackett died the year before the AD&D Dungeon Masters Guide was published, and two years before her last major screenplay, The Empire Strikes Back, was released to massive success. After Edgar Rice Burroughs, Brackett was one of the most notable authors of planetary romance, writing various Mars stories (the fix-up The Secret of Sinharat comes from this series) and later wrote more with Sinharat's protagonist, Eric John Stark, in her Skaith books. But she is probably better known for the screenplays she wrote; aside from Empire, she wrote The Big Sleep, The Long Goodbye, and Rio Bravo - putting a major mark on the cultural landscape for decades. 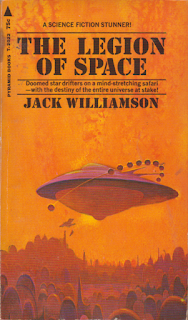 Jack Williamson was a consummate Golden Age science fiction writer, and was the second writer named as an SFWA Grand Master (after Robert Heinlein). His Legion of Space was loosely inspired by Dumas's Three Musketeers and Shakespeare's Falstaff, and is a classic space opera on par with E.E. "Doc" Smith. His Humanoids series is a classic exploration of the robot-out-of-control trope. He also wrote the Seetee series about antimatter and his short story "Collison Orbit" was the first use of the term "terraform." Williamson was unapologetic about writing popular science fiction and disliked the idea of authors needing to change or obscure their work to be "serious" or "literary."