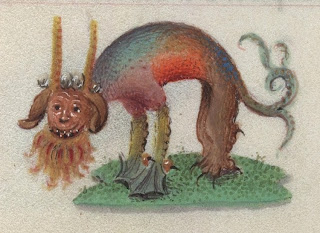 I recently read H.P. Lovecraft's "The Colour Out of Space" (which HPL regarded as his best story, and was certainly the best pure alien story I've ever read) for the first time since high school, and what's been percolating about in my head ever since was the way the eponymous Colour in the story physically taints the things around it. And it happened yesterday that Rafael Chandler posted on his G+ stream yesterday a selection of rainbow-coloured beasts from a medieval monk's book of hours.

Naturally, things began to coalesce. These rainbow monstrosities are the result of contact with an otherworldly ooze, which is normally semi-invisible (its actual coloration is not visible to the naked eye) but when a light source such as a lantern or object with light cast on it is shined directly at it, generates a sickly, unnatural rainbow of colors. Any living creature coming into contact with this ooze must save versus poison or become one step tainted.

Each level of taint brings with it some deformation, whether it be horns, growth of abnormal hair, mismatched limbs, or taking on the eerie rainbow colors of the ooze. The changes also grant some ability, roll 1d8 to determine:
Note that these abilities may be accrued multiple times. Each level of taint causes the subject to move one step toward Chaotic / Chaotic Neutral alignment, and requires a saving throw versus spells once per week or the subject goes irrevocably insane. One Cure Disease spell is required to remove an individual taint.
Posted by Wayne R. at 9:48 AM 1 comment: 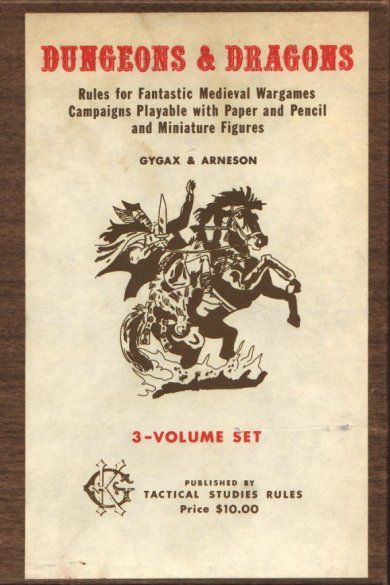 What we do as gamers and fantasy geeks today owes a tremendous amount to the guys who played their games and hand-assembled boxes in a basement 40 years ago. It's worth taking a moment to reflect on it, and if you can't play, to at least roll a 20-sider (preferably one numbered 0-9 twice).
Posted by Wayne R. at 7:31 AM 1 comment: