On the Character Sheet 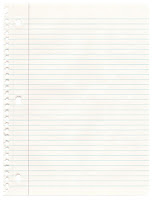 My general preference in RPGs is for character sheets that can be written on a sheet of lined paper. It's not that detailed or beautifully crafted sheets are wrong per se, but I like being able to take out a blank sheet of paper and write up a PC. Which is just my way of explaining why I put a picture of notebook paper on this post.

At a local mini-con, Legacies Game Day, I played a few games (Traveller, Dungeon Crawl Classics, Mutants & Masterminds) and so I got a few character sheets. The Traveller ones were spare to the point of parody: they contained what service the character had been in, the UPP, and the skills. We picked and added various equipment.

The DCC sheets were full pages, and had fun things written on them. Probably the biggest strength of DCC as a game is the way it provides lots of little hooks for players to role-play and improvise solutions to the problems that the judge presents. It also makes you look for things to do with oddball treasures found; in the post-apocalypse world we were playing in, I got a lot more mileage than you would think out of a fire extinguisher.

It's had me thinking of how well a few things on a character sheet can act as prompts for players. The first thing is when you look at the old equipment list – from the ten-foot pole to chalk to wolfsbane, even the fairly quotidian list in OD&D and other classic versions of D&D can provide a spark in the right mind. There are, after all, 101 uses for a 10 foot pole, right? Iron spikes are a good candidate for creative applications, but inventive players create all kinds of havoc. There's a reason, after all, that Holmes D&D has rules for setting things aflame with lamp oil. (My next dungeon might have a fire extinguisher in it.)

A little further afield is Zach H's list of OD&D backgrounds. Inspired by professions and monster listings in the original game, it's a very clever way to differentiate PCs. It also has shades of 5th edition, which has more in-depth versions. If you want to find a list of good 5e backgrounds I'd suggest Courtney Campbell's blog. They work fine outside of the 5th edition game, and Campbell's are more exciting than the ones in the Player's Handbook.

5e also has an excellent trinkets table. Probably the best thing in the PHB, it's a list of strange and wonderful things that a PC starts with in their possession. A good referee can find ways to tie these into larger mysteries. An enterprising one might also make their own background item table, tied into their personal milieu.

DCC has its own list of previous occupations, but they have a tendency to be genre-inappropriate. For the most part, sword & sorcery heroes are not former gongfarmers who sought their fortune in deep dungeons. Zach's OD&D occupations feel more suitably heroic. I do agree with DCC's method of random generation, though, because it slots well into a game with fairly high lethality at low levels. Its extra items are often the best bits, and encourage creative play more than its occupation bonuses.

Interesting bric-a-brac doesn't have to be limited to character generation, of course. The adventure can always use some detail items that most parties would ignore, but in the right hands can be a gold mine of ideas. This is useful when the PCs come to a storeroom or similar area. Stonehell provides a good example of a chart for such a room (level 1A, room 32, chart B). The "searching" table in the Ready Ref Sheets or any comparable table will also do for such areas.

In the dungeon, items of questionable utility can be easy red herrings. I'm against using too many of these, unless there is a good reason. But the obvious utility nature of an area can help with this. Once players have access in-character to supplies and time, results may vary.

Embracing these extra items on the character sheet can do a great deal of good in terms of roleplaying and improvisation in play. To me, that's worth more than a whole character sheet full of mechanical bits and bobs that tell the player what their character can or can't do.
Posted by Wayne R. at 1:00 PM 1 comment: