A Guide to Stonehell

Ah, Stonehell. The picture of the stairs got me thinking. 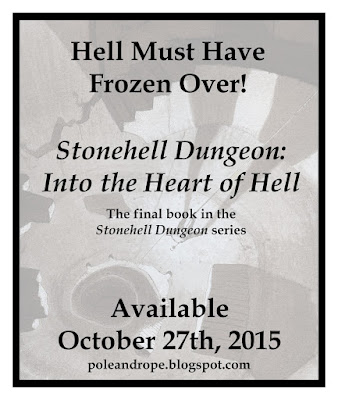 If you can't see that for some reason, the second book of the Stonehell megadungeon is coming out on October 27. That is awesome, and I want to talk about it a bit, having run the first book for a number of sessions and thought about what could be done better.

Presumably Stonehell Dungeon: Into the Heart of Hell will be available both as a PDF and in print-on-demand. I'd recommend getting the PDF (volume 1 PDF), because you can't really run a megadungeon from a perfect bound book. Also make sure you get Supplement One and Supplement Two.

I have had some ideas since I ran it on how I'd actually want the book presented. This is how I'd recommend preparing and running the dungeon.

First, there's the physical preparation of the materials. I'd recommend printing the front matter, the master maps, the monster lists, and the sublevel descriptions – but not the sublevel maps and keys – in a big spiral-bound book. You can get the print-on-demand versions, but a single spiral bound book is going to be easier to reference. Then get the appendices printed on good cardstock, so you can reference them frequently. Then get the two-page spreads printed out on sheets of white 11"x17" cardstock, so each sublevel is one big spread that you can reference while running the game.

Third, get a copy of B2 Keep on the Borderlands. The entrance to Stonehell is located in a canyon almost identical to the one housing the Caves of Chaos in B2. The titular Keep is a solid home base for adventurers, and the wilderness map is perfect for an expanded version of Stonehell's surroundings. the Dragonsfoot index to B2 contains an overwhelming amount of writing that has been done on B2. The Zenopus Archives resource page is a more compact guide, and The Project on the Borderlands is a solid set of enhancements.

Fourth, dig in and make it navigable. As you get familiar with the dungeon, create maps (which may be partly inaccurate or out of date, see the sixth point below) and write out directions that monsters or NPCs can give to PCs. Add in some extra treasure (Stonehell is pretty stingy with the gold stuff) and sprinkle in hints about where it is. The goal here is to encourage play that goes for bigger treasures rather than blundering through every room that Stonehell has to offer. You may want to also discourage players from taking a "typical" bash-in-the-door approach to areas such as the Quiet Halls or Kobold Korners (or later, Monster Dorm) as this can turn into a grind.

Fifth, make it your own. Stonehell is a campaign, not a few sessions, and it cries out for a referee's individual stamp. It needs more treasure, it needs more weird monsters, and it needs sublevels. Take either material you've written, or from other modules, and steal it for Stonehell. If I were to run it again, I'd work in a lot of material from Geoffrey McKinney's Isle of the Unknown and Dungeon of the Unknown. It's fresh, distinctive material that contrasts well with the classic D&D feel that is abundant in Stonehell. Just one example: the "dragon" in level 1A could easily be creature C11 in Dungeon of the Unknown, which has a "breath weapon" consisting of razor-winged butterflies; that would totally change the complexion of the encounter. You can hang a lot of other material on what has been written here.

Finally, make it a living dungeon. The kobolds are a great mechanism for doing this. Throw up "under construction" signs, block off passages that PCs have previously taken, and create a roster of new monsters to move into areas that have been "cleared." Slap fresh coats of paint or have a slime monster create a tunnel that wasn't there before. Especially when PCs choose to spend time away from the dungeon, it should not be the same place when they come back.

One side note: while Stonehell can be run reasonably well in pretty much any system you like, it pays to have a copy of Labyrinth Lord handy, just for reference to the monster descriptions. Stonehell's stat blocks are tight, but they don't list out any special abilities of the various creatures. B/X, and hence Labyrinth Lord, critters are a touch different from those found in non-B/X derived games.

Stonehell is a neat place, and if the first half is any indication the full thing will be worth the work. Michael Curtis has created a huge, coherent dungeon that is a solid basis for a D&D campaign. But it needs to be treated as a collaborative effort; the very style of a megadungeon campaign deserves no less.
Posted by Wayne R. at 4:11 PM