Fredric Brown made an impressive showing and defeated Stanley G. Weinbaum on day 15; he will go on to face Poul Anderson in Round 2.

Day 16 is the last day of Round One of Appendix N Madness. It pits Michael Moorcock against August Derleth. 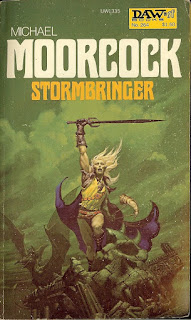 Michael John Moorcock is the sole surviving author listed in Appendix N, and one of the great living fantasy writers. His debut was with a sickly albino sorcerer wielding a vampiric runesword, the last emperor of the inhuman and decadent empire of Melniboné, Elric VIII. Elric and Stormbringer are both in their own right iconic fantasy characters. Dorian Hawkwind, Jerry Cornelius and Corum and generally all the incarnations of the Eternal Champion are all fascinating but in this regard they fall short of Elric. This is an ironic parallel to Conan, since Elric was devised as an anti-type to Howard's powerful, pragmatist barbarian. He represents everything Conan is not, and as such is one of the few heroes of similar standing. 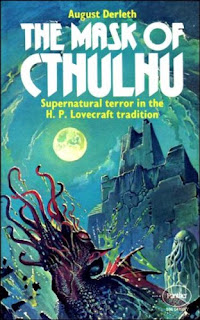 August Derleth was a prolific writer. He wrote a Proustian epic called the Sac Prairie Saga that is a sort of attempt to create an American version of a Proustian roman fleuve. Derleth was a correspondent of H.P. Lovecraft and wrote a number of stories imitating his more celebrated friend (including an anthology, The Watcher Out of Time, that carries a spurious attribution to Lovecraft). His work is widely considered too optimistic and good versus evil, fundamentally misunderstanding HPL. He founded Arkham House to publish Lovecraft's work, and is generally credited with transforming Lovecraft's creations into the "Cthulhu Mythos." He also had a Sherlock Holmes imitation named Solar Pons. Derleth's main credit is that he is, single-handedly, the reason so many people have read Lovecraft.