Jack Vance defeated Michael Moorcock and will advance to the semi-final.

In the Weird vs Fantasy semi-final, the man from Providence faces off against the two-fisted Texan in a battle of the immortals. 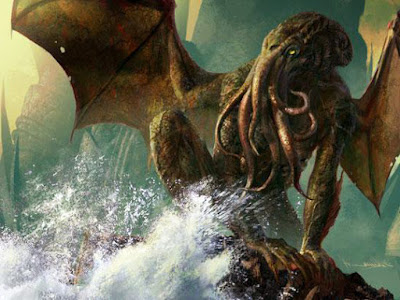 This could have been the final round, if they didn't meet in the semifinals. Lovecraft has overcome Margaret St. Clair, Manly Wade Wellman, and Edgar Rice Burroughs to justify his spot atop the Weird bracket. Robert E. Howard was barely troubled by David C. Smith and John Bellairs, and defeated J.R.R. Tolkien decisively.

Both are titans in Appendix N and their influence and reputation barely have to be justified. They appear of course on the "short list" of Gary Gygax's particular influences, and both of their works have been adapted to D&D as well as inspiring multiple independent RPGs. 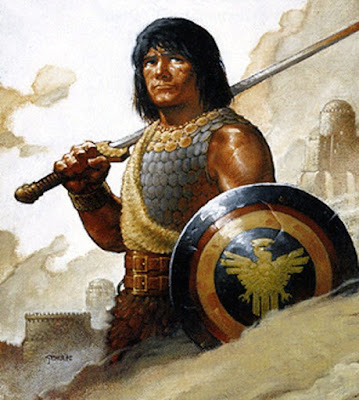 Biography links these two authors tightly, even though they never met in person. Lovecraft kept an extensive circle of correspondents, and Howard was a member of this group. They both had major successes in Weird Tales, which Howard was increasingly part of toward the end of his life. And Lovecraft would pass on less than a year after young Howard took his own life, cutting the golden period of the magazine woefully short.

With each of them I'd be hard pressed to pick only one favorite story. I dearly love "The Colour Out of Space" by Lovecraft, and probably would pick "Tower of the Elephant" as a favorite Howard yarn. But any of their works is dripping with inspiration both as fantastic literature and for roleplaying gamers.

Howard's written output, at least in terms of short stories, is several times longer than Lovecraft's. And it is actually worth climbing into; Del Rey did a series of trade paperbacks in recent years that includes not just Conan, but also volumes of Solomon Kane, Kull, Bran Mak Morn, El-Borak, and general collections of Howard's historical and horror stories. (Long-time readers of the Marvel Comics Conan the Barbarian and Savage Sword of Conan will recognize some of these stories, although the comics added Conan to them.)

Lovecraft's fiction fits in three modest volumes from Penguin, which I prefer because of the footnotes by S.T. Joshi. They show how closely Lovecraft grounded some of his work in the real world, particularly with The Case of Charles Dexter Ward. This is a stark contrast between Lovecraft and Howard: where Lovecraft's work was deeply set in the contemporary world, Howard used his settings as a backdrop to add color to the adventure.

The difference in philosophy strikes me as similar to this comic:

Lovecraft prefers to dwell on the nihilistic elements of scientific materialism. He uses alien horrors to show the irrelevance of human life and endeavor when viewed against a bleak and unknown cosmos. Howard looks at similar horrors, shrugs, and creates Conan, who is going to carve his own meaning into this empty shell of life.

By far the best examples are two famous quotes. Lovecraft's from "The Call of Cthulhu":


The most merciful thing in the world, I think, is the inability of the human mind to correlate all its contents. We live on a placid island of ignorance in the midst of black seas of infinity, and it was not meant that we should voyage far. The sciences, each straining in its own direction, have hitherto harmed us little; but some day the piecing together of dissociated knowledge will open up such terrifying vistas of reality, and of our frightful position therein, that we shall either go mad from the revelation or flee from the light into the peace and safety of a new dark age.

And Howard's from "Queen of the Black Coast:


He shrugged his shoulders. "I have known many gods. He who denies them is as blind as he who trusts them too deeply. I seek not beyond death. It may be the blackness averred by the Nemedian skeptics, or Crom's realm of ice and cloud, or the snowy plains and vaulted halls of the Nordheimer's Valhalla. I know not, nor do I care. Let me live deep while I live; let me know the rich juices of red meat and stinging wine on my palate, the hot embrace of white arms, the mad exultation of battle when the blue blades flame and crimson, and I am content. Let teachers and priests and philosophers brood over questions of reality and illusion. I know this: if life is illusion, then I am no less an illusion, and being thus, the illusion is real to me. I live, I burn with life, I love, I slay, and am content."

(It is a great shame that the real Conan's philosophy, which is quite sophisticated, is forgotten in favor of the quote from the John Milius Conan the Barbarian.)

A piece of the greatness of both Howard and Lovecraft is how accessible they are. You can sit down in an hour or two and read "The Call of Cthulhu" or "Red Nails" and you will have an immediate connection to these authors and their work. Yet they are infinitely rewarding for re-reading; I've sat down and read every single word of "Shadows in the Moonlight" closely, just to get a feel for how Howard built that story, and every three or four sentences throbs with life and creation. And every time I re-read Lovecraft's work (at least the ones from 1926 onward) I find new connections and threads that I hadn't seen before.

This is a battle of the titans.