J.R.R. Tolkien was the victor of Day 14 and goes on to face Fritz Leiber in Round 2.

Day 15 of Appendix N Madness closes out the first round for Sci-Fi with Stanley G. Weinbaum versus Frederic Brown. 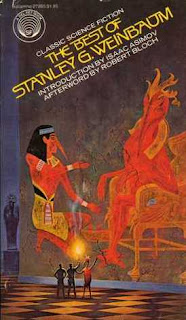 In 1933, a new voice burst on the science fiction scene to tremendous acclaim. By 1935 he would be dead, but having made a great contribution in his short time. His first published story, "A Martian Odyssey," is an exceptional study in the creation of a genuine alien intelligence. Few subsequent science-fiction extraterrestrials are as intelligent without thinking humanly as Weinbaum's curious Tweel. One of his posthumous novels, The Black Flame, was a post-apocalyptic story firmly in the science fantasy genre. Weinbaum's death at a very young age meant that he never had time to polish the novel, or develop many of his earlier ideas, but his mark was profound and he remains one of the best golden age SF voices. 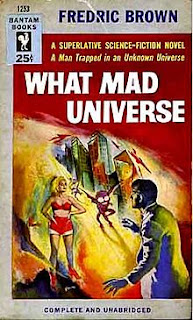 Fredric Brown was a golden age science fiction author who wrote many short stories with a distinctly wry and humorous note; this is probably why he was listed in Appendix N, since Gary Gygax had a strong love for this sort of humor. His What Mad Universe had a pulp science fiction editor who hated space opera thrust into, well, a space opera; his Martians Go Home satirically features the iconic "little green man" type of Martian. His short story "Knock" is legendary for the opening line: "The last man on Earth sat alone in a room. There was a knock at the door..." Another of his short pieces, "Arena," was adapted for the Star Trek episode of the same name.