H.P. Lovecraft is the winner of the first Round Two event, and will go on to face either Lord Dunsany or Edgar Rice Burroughs in Round Three. 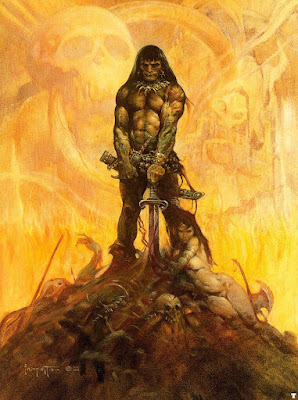 One of the peculiarities of Appendix N is that only Conan is listed from among Robert E. Howard's dozens of creations. Fans of other Howard characters, particularly Solomon Kane, have called this into question. The Puritan Kane, whose adventures fit more squarely into the mainstream of <i>Weird Tales</i>, is an excellent archetype for the cleric class. Other characters such as the adventurer El Borak or the Valusian king Kull are also obvious inspiration for D&D material.

But Conan was unique among them, and it is not an accident that he stands head and shoulders above. Gary Gygax was particularly a fanatic for the Conan work; the point he sold Jim Ward on was that D&D is a game where you get to be Conan. And this is why Gary expected most players to want to play a human fighter, because after all who wouldn't want to be Conan?

More than any other character, Conan exemplifies D&D's arc, moving from an anonymous adventurer, becoming a reaver and cutpurse and slayer, and then moving on to be a ruler of men. That was in the game from the get-go, after all.

The Conan stories, more than any of Howard's other works, are unique in their literary quality. It was here that the Texan's sense of visceral conflict played out most completely, in an idiom that was often imitated, but the imitators rarely reached the same heights of descriptive writing. Poul Anderson eventually had to decry these knockoffs in "On Thud & Blunder," and the most infamous example is the purple I-have-a-thesaurus prose of "The Eye of Argon." But Howard's original words still leap out and Conan comes to immediate, vivid life. No other fantasy character is as imitated or as iconic.

And so, yeah, Appendix N only listed Conan. What else is there to say?

The Face in the Frost was a well received debut novel. It's a romp following its duo of wizards through a very strange adventure in the semi-anonymous South Kingdom that switches fluidly between suspense and humor. He never finished the sequel, The Dolphin Cross, although the draft is apparently available for purchase today.

The wizards from Face in the Frost are quintessentially English. The viewpoint character is Prospero, who shares a name with the protagonist of The Tempest, William Shakespeare's last play and the one that deals most with magic and fantasy. Of course, this Prospero has not broken his staff and doesn't have a Caliban. Instead he is accompanied by Roger Bacon, who appears well patterned on the famous Franciscan friar and reputed wizard. Their magic is odd but has a good flavor for real-world occultism and would be a good place to look for inspiration when one wants to detail the fights between powerful sorcerers.

After The Face in the Frost, most of Bellairs' output was in the "young readers" demographic, and outside of the general "Appendix N" purview. Yet - that one book certainly was something.