Lord Dunsany took the last day of the Weird region with a powerful victory over Ramsey Campbell.

Day 14 brings us the last match-up of the Fantasy region: J.R.R. Tolkien vs Richard L. Tierney. 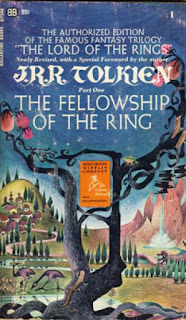 J.R.R. Tolkien
Lived: 1892-1973
Notable Works: The Hobbit, The Lord of the Rings, The Silmarillion, The Children of Húrin

John Ronald Reuel Tolkien was a World War I veteran and a contributor to the Oxford English Dictionary. He taught philology at Oxford and wrote a prose translation of Beowulf. During his convalescence after being wounded in war, Tolkien wrote a fantastic mythology initially called The Book of Lost Tales parallel to the development of several invented Elvish languages that would later form the Silmarillion. He never completed or published this work in his life, although his son has published numerous versions based on the in-progress work. In the 1930s Tolkien wrote a children's fantasy book, The Hobbit, loosely influenced by this mythology. In the 1940s and into the 1950s he wrote a much longer novel, The Lord of the Rings, that was broken into three volumes for publication.*

Tolkien's work was not accessible to most readers until Ace released an unauthorized paperback version (following the three-volume division) in the 1960s. These books drove an absolute mania for Tolkien and fantasy more generally, with Ballantine putting out the official authorized paperback versions. Tolkien was therefore an unexpected phenom at the end of his long life, and sadly had little time to take advantage of this. His son Christopher has published almost all of Tolkien's writing, including extensive information on his invented languages, of which Quenya is the most complete and Sindarin the most popular. Tolkien's works have been adapted into massively popular films and every genre of media imaginable, although few of these have the approval of Christopher or the estate. From the late 1970s into the 1990s, the fantasy genre became almost slavishly imitative of Tolkien, and his impact on Dungeons & Dragons and fantasy in general is profound.

*Even though copies of The Fellowship of the Ring, The Two Towers, and The Return of the King say that they were a "trilogy," Tolkien objected to this term and considered LotR a single novel, broken into six books, and not three separate works. 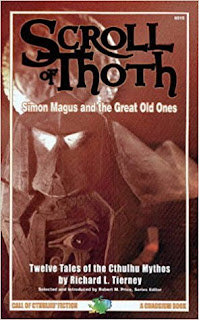 Richard L. Tierney is a minor Lovecraftian writer. He is best known for co-writing the Red Sonja novels with David C. Smith, but has written his own Lovecraftian work featuring Simon of Gitta, who is introduced in "The Sword of Spartacus" in Swords Against Darkness III.The character's further adventures were collected in a 1990s volume from Chaosium, The Scroll of Thoth. Tierney was included in an anthology placing him in The New Lovecraft Circle placing him alongside writers like Ramsey Campbell, Brian Lumley, Karl Edward Wagner, Thomas LIgotti, and Robert M. Price. He has also written extensive science fiction poetry, much of it dealing with similar Lovecraftian themes.