In a tightly fought battle, J.R.R. Tolkien triumphed over Fritz Leiber with 72 votes to 70 votes and will go on to face Robert E. Howard in round 3.

Day 23 takes us back to Sci-Fi for Poul Anderson vs Fredric Brown. 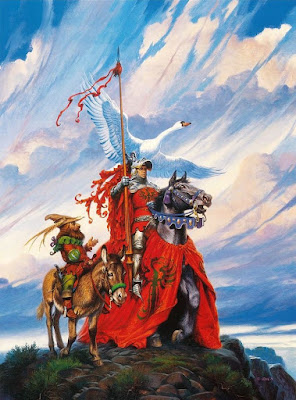 The relative handful of fantasy books that Poul Anderson put out all have some science fiction touches to them. The paladin protagonist of Three Hearts and Three Lions is an engineer from Earth who finds himself in a fantastic realm; the scene where Holger tosses a bucket of water down the gullet of a dragon is one of the strangest such fights I can think of. Even the more explicitly fantastical The Broken Sword justifies its elves' allergy to iron in pseudo-scientific terms. In both, you can see Anderson's love of medieval lore (the Matter of France in Three Hearts and Norse myth in Broken Sword) strain against his instincts as a SF writer. In The High Crusade he just goes whole hog and throws medieval Englishmen against aliens.

Gary Gygax stole a bunch of concepts in complete detail from Three Hearts, so its influence is transparent. Michael Moorcock also was explicitly inspired by the fight between Law and Chaos in that novel, so you can blame it for everything from alignment to Arioch. Yet D&D oddly doesn't draw any of the scientific conclusions that Anderson's novel would. Paladins are purely taken at face value, and dragons don't end badly if you use a bucket of water against them. A Sword +3 Flame Tongue isn't made of magnesium, either. The borrowing winds up being shallower than one might think. And while The Broken Sword makes a stronger impression as a novel it leaves much less direct, verifiable evidence in D&D.

Anderson, with Norton, is one of the best SF writers in Appendix N for fans of Traveller. His cycle of the Polesotechnic League and the Terran Empire with merchant-explorer Nicholas van Rijn and space spy Dominic Flandry are terrific. But for D&D purposes, it's really his fantasy output that is worth considering. 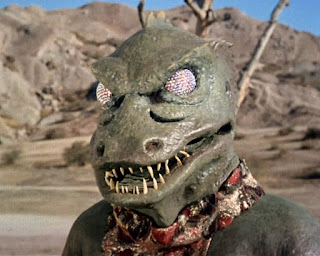 If there's an author in Appendix N who didn't make an appreciable mark on D&D, Fredric Brown (his name is misspelled in Gary's list) is that author. His finest work was in his short fiction, which tends to be stories heavy on irony and moral lessons. Brown's "Sentry" is the archetype of the story that ends with the reveal that the protagonist is an alien fighting against humans. His "Knock" is entirely structured around the lines: "The last man on earth sat alone in a room. There was a knock at the door..."

An enterprising referee could grab the "roller" from Brown's "Arena" or the more famous Gorn from its Star Trek adaptation as a go-to monster (I included a picture of the latter because I don't have any good Fredric Brown inspired art). And Gary Gygax, being the sort who loved puns and jokes, probably got mileage from Martians Go Home for monster inspiration. Brown is a fine short story author but I can't see him making an Appendix N drawn up on any principles other than "Gary Gygax's bookshelf."