Things have been quiet here because, well, they've been quiet in my gaming. I haven't been actively doing much by way of hangout gaming, but I got to run some games for other folks I know who drafted me to run an old school D&D game in Philadelphia.

I used Dyson Logos's ReQuasqueton map, which was his riff on the classic module B1 In Search of the Unknown. I wrote up my own concise version of Quasqueton that was similarly taking B1's concepts and developing them rather than following it literally. This is what the resulting player map looked like:

Since it was a one-shot and started at level 1, I decided to use Holmes Basic. The decision was really assisted by the excellent work Zach H. has done with Holmes Ref, a great series of one-page utility tables for Holmes Basic D&D that, particularly his recent character creation worksheet that gives a concise one page guide to rolling up a PC.

The crew started out balanced: two fighters, a cleric, a dwarven thief, and a magic-user / torch holder. I used hints of the battle in the entrance to Quasqueton as in B1, which gives a nice sense of danger. Tarrying at the entrance attracted wandering skeletons, which were turned and then pursued and beaten. The lack of any duration of turning makes the mechanics kind of wonky when players decide to kill the monsters anyway; I decided that turning lasts at least a turn, and the result was that the PCs pursued the monsters through a length of hallway.

They missed a room I was really hoping they'd pick up on, but did at least give the cavern section a brief go. The result was probably for the best, as the dwarf decided not to check out the bioluminescent fungus in the cavern beyond.

A tea service in one room was suitably freaky, with the cleric's player acting ultra-paranoid as one of the fighters ate one of those little cucumber sandwiches (they looked fresh and produced no ill effects). The teapot was eventually used as ammo against more skeletons in the following room, while the magic-user had considerable success using chairs as one-time improvised weapons; he did so well that he hauled a chair around and used it as a prop going forward.

Standard d6 damage in Holmes may seem like weak tea, but I do love the flexibility it allows. Maces, daggers, chairs – the variety is fun. I think the main issue isn't to add variable damage but to give monsters d6 hit dice (as the first edition of Holmes implied) and allow fighters bonus damage, and link it to high Strength: d6+1 for fighters with Strength 14 or better, d6+2 if they have Strength 18. Not only does it make the fighter a better class, it also gives the Strength spell something useful to do.

Eventually the PCs wound up fighting berserkers. Now, berserkers are to me like the booby prize of old school D&D. You put them in thinking, "Oh, this will be interesting." But then you put them in and you remember that berserkers just fight. They never break morale, they never negotiate, no prisoners is written into the description. It makes them one-dimensional, which is nice for "bad guys" but kind of bland for a dungeon that needs interesting factions. Forget the berserkers, use actual Norsemen instead.

The design of the rooms in ReQuasqueton wound up with a period where the dwarf was dead (he wanted to negotiate when he had succeeded in using Move Silently and gotten a full surprise round on three of the berserkers) and one fighter was holding a door with the rest of the group behind him. It wound up going better once the PCs took the room inside, but only because my dice stopped rolling over 10 and couldn't even hit the magic-user. So the PCs took a decent haul out with only one fatality.

One move I particularly enjoyed was one of the fighters trying to use her spear against two opponents in one round. I told her if she got a 20 on the die roll I'd let her make a second attack; she actually got a 19 and then rolled 6 damage on an opponent with just 2 HP left, so I let her get a point of damage against the second berserker. With older D&D combat I really find encouraging things like that, but leaving it at a fairly hard difficulty, makes life more fun.

ReQuasqueton is a solid map. It's got some nice long corridors without turning all mazy and geomorph-ish like the original. And since it basically invites a similar riff on B1 when populating the dungeon, it allows you to make it a good classic dungeon romp without duplicating the original. Running it with two players who'd DMed In Search of the Unknown worked out well; they recognized broad strokes but didn't know the map in advance. I enjoy the concept of a "module riff" and would have fun doing the same with B2.

Going back to Holmes really felt like the right move in this game, and it worked like a charm. It's light and really close to classic D&D without being hard to reference like OD&D can be in play. While it needs some tweaks and adjustments, it's actually the version of D&D I'd probably most recommend that a referee runs as a go-to for games that really need to have that classic "D&D" feel (as opposed to OD&D which is its own thing and has a different purpose, as a basis for freestyling rather than a complete package).

One note – it's always worthwhile to tell the player of the magic-user a few things, like the fun of torch-holding, the utility of lamp oil as Molotov cocktails, and the power of the Sleep spell. Although I really enjoyed the turn toward WWE style use of chairs from the player. If you don't, you're not taking the journey with me. Picture the stereotypical D&D wizard. Now he's going all WWE on skeletons. Yeah. That's just fun and there's no apologizing.
Posted by Wayne R. at 9:20 AM 3 comments: 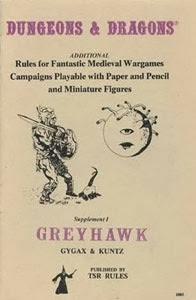 I don't want this to be misconstrued. Greyhawk was where a number of classic ideas that have entertained people for decades got their origin, and deserves to be read as such. I just think that, as far as OD&D today goes, there is a sound creative reason to go back to the sources, and adding Greyhawk in is a distraction from that.
Posted by Wayne R. at 9:06 PM 1 comment: