Jack Vance dominated in a victory over Roger Zelazny and will go on to Round 3.

Day 21 brings us to a battle of two of the earliest authors in Appendix N: Edgar Rice Burroughs and Edward Plunkett, Lord Dunsany. 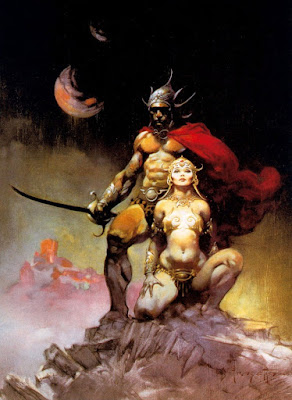 The foreword to the original D&D set described the game's purview as fantasy, and its first example was "Burroughs’ Martian adventures where John Carter is groping through black pits." OD&D had a distinct Barsoom flavor in the encounters section, which listed various Martian foes that Carter fought in his adventures, although later editions would downplay these connections.

Edgar Rice Burroughs's prime work, particularly the Barsoom novels, is rip-roaring adventure. If you read too much of it at one time, it becomes fairly obvious that he was working off of a straightforward outline and the plots can be formulaic. But it was all in service of his worldbuilding, which was endlessly inventive. John Carter (or one of a half-dozen others) finds himself lost in some new land, where a new threat presents itself. Then there's some helpful exposition and some desperate plan that gets him out of one problem and into a deeper one, and this continues until the book resolves neatly.

Of Burroughs's worlds, Barsoom was by far the best imagined. His Venus lacks the same feel, and Pellucidar is somewhat derivative. Tarzan keeps getting recycled but the racial implications seem to have put a damper on the once massive appeal the character had. Certainly Barsoom, where the races should be treated as pure fantasy, remains the most fertile ground for gaming inspiration, and the first six novels are the best reads. 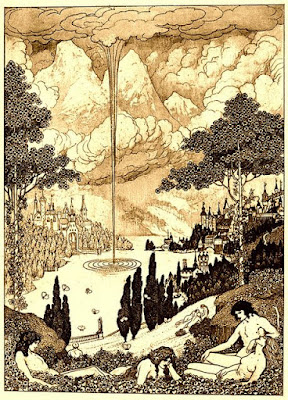 A lord in what became modern Ireland during his lifetime, Lord Dunsany was a fantasist of rare imagination. He created a unique mythological cycle in his short story collections, The Gods of Pegana, Time and the Gods, The Sword of Welleran, and The Book of Wonder. The first two are in a very "high" register, almost Bible-like in both scope and in their language. Particularly The Book of Wonder contains tales that relate more directly to D&D-ish fantasy, such as "Distressing Tale of Thangobrind the Jeweller" and "How Nuth Would Have Practised His Art Upon the Gnoles."

Dunsany returned to these themes in the 1920s with his masterwork The King of Elfland's Daughter, which carries both his rich language and his high fantastic concepts for a full length novel. Here he relates the fantastical Elfland to the more mundane "fields we know," although when the book starts out with a witch gathering thunderbolts to craft a magic sword, exactly how mundane those fields are is up for question.

Altogether Dunsany was a prodigious writer of what can only be called very pure fantasy. It would be impossible to have the "big three" of Weird Tales without him, particularly Lovecraft who started out trying to write pastiches of Dunsany (what is now known as the "Dream Cycle"). His work is inventive in ways that very little fantasy has ever tried to reach.