Leigh Brackett managed to come out ahead on Day 19 of Appendix N Madness.

The match-up for Day 20 is two heavy hitters of SAGA / Amra: Jack Vance versus Roger Zelazny. 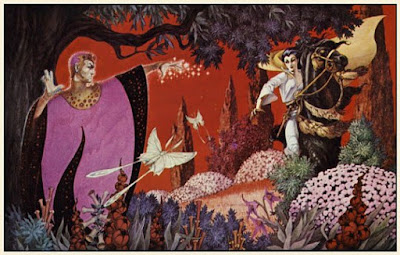 While Appendix N lists only The Dying Earth and The Eyes of the Overworld by name, if you read the Dungeon Masters Guide it is quite clear that Gary Gygax was also a fan of Vance's Planet of Adventure series, as he describes "Dirdirmen" in the Castle Greyhawk dungeons. In a recent interview his son Ernie described Vance as a particular favorite.

Cugel the Clever of The Eyes of the Overworld and Cugel's Saga is a particular archetype of scoundrel and ne'er-do-well; I've seen many murderhobo PCs who fit his template exactly. Many of the magicians of The Dying Earth are likewise scoundrels, but of a wizardly type.

It also has to be noted that Vance was one of the better prose artists of this whole tournament. The Dying Earth RPG had to incorporate a whole system of repartee to match the wit the stories' protagonists display. And simply in his ability to craft sentences, Vance can be intoxicating. 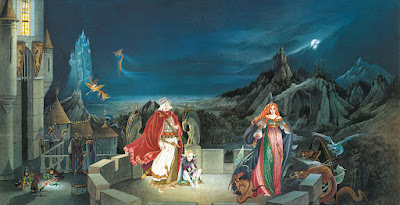 The scene in Nine Princes in Amber where Random and Corwin drive through the ever-shifting Shadow toward Amber is one of the great chase sequences in any of the Appendix N books, and it alone would mean a film or TV adaptation of the Amber Chronicles would be, understandably, ambitious. Zelazny's masterwork is this series of epic intrigue and nearly godlike power, which is such a fit for today's television market that it should be no surprise there is serious talk about an adaptation.

It's not an accident that there was an Amber roleplaying game, nor that this game bears a close resemblance to the game Diplomacy. Gary Gygax and Rob Kuntz were absolute fanatics for the latter and their play of NPCs was equally cut-throat. If your group isn't up for that, then Amber might not be the right RPG influence for you.

Zelazny was a masterful storyteller. I found the first five Amber books to be compulsive page-turners, each new twist burying Corwin in further trouble that he has to work his way out of. Zelazny's ability to write smooth, readable, modernist prose was a major factor in that. Though I do have to fault him for nicknaming the protagonist of Lord of Light "Sam" when, given a character identified with the Buddha, the opportunity to call him "Sid" is right there. But every Zelazny book I've met goes down smooth and keeps you hanging for what the next twist will be.