Robert E. Howard won somewhat predictably in his match against John Bellairs and will advance to face the winner of Tolkien / Leiber in Round 3.

Day 19 brings us to a battle of two of the great women writers of science fiction: Andre Norton and Leigh Brackett. 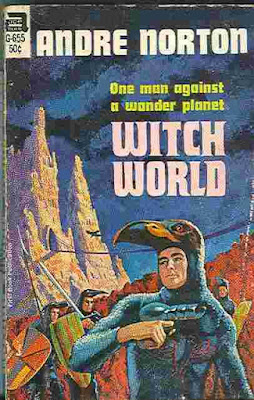 One of those Grand Masters who wrote for simply decades, Andre Norton was a true master of the adventure form. She had a particular penchant for taking a character (or sometimes a few characters), stranding them in a strange world, and having them discover strange wonders, encounter relentless foes, and find occasional allies in the wilderness. That's right, Andre Norton wrote hex crawls.

That's a little dismissive of her work, which is absolutely terrific reading, but I can't think of a better inspirational author to read if you want your characters to hop from place to place and have adventures. And between Daybreak 2150 A.D., Witch World and Forerunner and Solar Queen, she can inspire Gamma World, D&D, and Traveller campaigns. You'll generally want to pick up a Norton novel when you have a bit of time free; she's an easy read and her books are most enjoyable when read straight from start to finish with few interruptions. 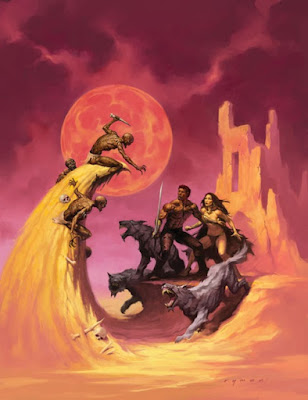 Planetary romance fell out of favor for various reasons as the Space Race showed what the Solar System actually looked like, and there turned out to be a disappointing lack of green men, whether 3 or 15 feet tall, on Mars. Leigh Brackett started off as a writer of the old style of romance, setting the adventures of Eric John Stark on the Red Planet. When she returned to the character she had to set him up on a remote world named Skaith.

Stark is basically a planetary Tarzan, and has rip-roaring adventures whether you pick the early Mars works (Secret of Sinharat and People of the Talisman) or the later Skaith books (The Ginger Star, Hounds of Skaith, Reavers of Skaith). It's no surprise that from this author we also saw The Empire Strikes Back, which has several memorable worlds (Hoth and Bespin) that were in Brackett's first draft, or putting the heroes into an action sequence in an asteroid field. Sadly, Brackett didn't survive to see that vision realized, but she left a worthy legacy for generations of science fiction fans.