I don't do many reviews of RPG products here, and I'm not about to start. But I do want to talk a bit about James Spahn's White Star: White Box Science Fiction Roleplaying, because there are some things worth talking about.

I think White Star was marketed poorly. It's slick and well laid out, and a lot of people in the OSR are talking about it in terms that glow more than the lens flare on the cover. There's already fan material and even a zine that I've already ordered. And that's all to the good, but clearly some people got the wrong impression, and some of the reaction to White Star has been pretty negative.

My impression is that the marketing, and the book itself, is almost too slick. Given what it is, White Star would be better off looking less polished and more "white box."

The game, as written, is not so much an adaptation of Swords & Wizardry: Whitebox as it is a reskin. It re-themes D&D magic-users as Jedi - "Star Knights" - who wield lightsabers ("Star Swords" that do all of 1d6+2 damage) and cast "Meditations" instead of spells. Fighters are Mercenaries, Thieves are Pilots, and Elves are Alien Mystics.

What really cements this is the experience system: it uses "credits" as the measure instead of gold pieces, but you get XP for killing monsters and gaining credits. Despite the back-cover claim that the game takes you "out of the dungeon and into the stars," when you read the sample adventure it's a space dungeon. And I mean, I have nothing against that; it's kind of a cool idea to have a D&D dungeon in space, and to replace your two-handed sword with a lightsaber ("Star Sword") and your crossbow with a laser pistol. But that is really what it's doing. The Star Sword does 2 points of damage more than a stick. The laser pistol does the same. Meditations are spells, period. Things work like they do in D&D, not like they do in Star Wars (or any other space opera). Because of the game's logic – really D&D's logic – you're basically going to be playing D&D in space.

Now, I don't think that's bad per se. The book has some cool science fantasy monsters and artifacts in it. And any game with Space Monkeys can't actually be bad. But I do think it's marketed wrong, possibly because it's so easy to bury the lede. This isn't Traveller, it isn't Firefly, and despite some trappings it's not Star Wars. This is Swords & Wizardry set in space dungeons.

This isn't a review, so I'm not going to answer the question of whether it's worth getting. A lot of the book is a reskinned restatement of Swords & Wizardry. The parts that are good, like the robot PCs and the 22 pages of aliens and creatures, are quite good. The parts that are lame, like the Meditations, are irretrievably lame. But hey, it does have Space Monkeys.
Posted by Wayne R. at 5:07 PM 2 comments:

Petty Gods - Across the Finish Line 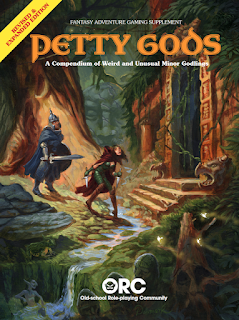 The project to revise and expand Petty Gods – a spiritual sequel to the Judges Guild classic Unknown Gods – is finally complete. This is a hefty tome, almost 400 pages, of deities created by many authors throughout old school gaming (yours truly included).

It's available in three formats:

It took years to come together and exhausted several editors, but it's finally here thanks to Richard LeBlanc. I'm extremely excited to have this book out there; it's a huge accomplishment for our community to have put together something like this.

The "Writer" credits are extensive and include a lot of excellent people. The meat of the book is not just the Petty Gods of the title, but their chapters full of Minions, Knights & Servitors (monsters), Cults & Cultists (natch), Divine Items and new Spells. There's also an article by M.A.R. Barker (letting each of us share an author credit with the late Barker), one on the Gods of Barsoom, one full of tables about the Jale God, silly ones like "Petty Foods of the Petty Gods" and "Petty Classifieds," and an Appendix N. Gods are indexed by name, writer and artist, and each entry includes full credits.

I'm proud to have taken a part in creating something that is really quite cool, and give tremendous thanks to the people who've contributed to and driven it, particularly the editors.
Posted by Wayne R. at 9:09 AM 2 comments: 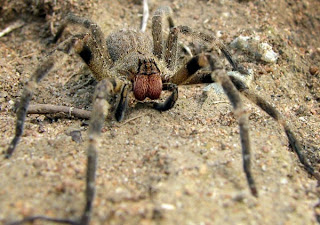 Spitder Image by Techuser, CC-BY-SA
Posted by Wayne R. at 9:51 AM 3 comments: