I'm starting a new campaign using the D&D Rules Cyclopedia that I'm calling, because of its timing, Sunday AM D&D. I want to use the 20 questions from Jeff Rients to define some of the basics of the kingdom of Pelyria.

1. What is the deal with my cleric's religion?

2. Where can we go to buy standard equipment?

PCs start out in the town of Farwater on the west bank of Lake Dremen. The retired adventurer Joberd operates a general store that sells most typical adventuring euqipment, although weapons other than bows and arrows have to be bought from the blacksmith Treb.

3. Where can we go to get platemail custom fitted for this monster I just befriended?

No one in Farwater makes platemail. The king's armorsmiths in Ardglas might be willing to do it but it would take weeks for the fabrication.

4. Who is the mightiest wizard in the land?

Fen Pal of the Yellow Cloak is reckoned the mightiest, although Genten the Merciless in his tower to the north is considered far more dangerous.

5. Who is the greatest warrior in the land?

Arris the Daring, a retainer to King Merik IV, is the greatest warrior. His castle in Westerlyn is home to an annual tournament that draws warriors from far and near.

6. Who is the richest person in the land?

Borin Lo is a powerful merchant prince with a palatial estate south of Lake Dremen.

7. Where can we go to get some magical healing?

Look for a cleric and hope you're of the right alignment. There's an Unconquered Sun monastery in the Fazren Hills.

8. Where can we go to get cures for the following conditions: poison, disease, curse, level drain, lycanthropy, polymorph, alignment change, death, undeath?

As with #7 above. Several of these can also be cured by powerful wizards. Again: good luck.

9. Is there a magic guild my MU belongs to or that I can join in order to get more spells?

Magic-users are under the tutelage of a mentor until 4th level, and gain spells from them (as per Rules Cyclopedia). After that, they may go to Ardglass and attempt to pass the tests to join the Arcane College. There are practical and knowledge tests. If the MU passes, they get access to the College's library and higher-level spells, although there are very strict regulations on spells above 6th level. If they fail, they have to continue as hedge-wizards and fetch spells as they may from lost spellbooks and discovered scrolls. Many of these get up to 9th level and join the Alchemists' Guild.

Elves are of course different; after 4th level they need to perform a quest for the King of Elfland in order to gain access to their family spellbook, an heirloom passed down among generations. Sharing spells from this book with outsiders would be unthinkable.

10. Where can I find an alchemist, sage or other expert NPC?

Ardglas, although some itinerant experts will pass through places like Farwater.

11. Where can I hire mercenaries?

If you go south to Valnesse, there are usually mercenary companies working there. They will hire men out at fairly normal rates.

12. Is there any place on the map where swords are illegal, magic is outlawed or any other notable hassles from Johnny Law?

Casting spells within Ardglas is strictly regulated. In most of Pelyria, casting spells is frowned upon but not illegal.

13. Which way to the nearest tavern?

There are several dockside bars in Farwater, notably the Old Salt, which has a rather hard reputation. The Sign of the Hippogriff is a decent place to grab an ale and you're not likely to get into a rumble. If you can snag an invitation, Zell Lefa hosts the best parties in town.

14. What monsters are terrorizing the countryside sufficiently that if I kill them I will become famous?

Currently there is something of an influx of goblins making the roads unsafe at night. But if you want to become famous, there is word of a dragon in the Fazren Hills.

15. Are there any wars brewing I could go fight?

The border with Valnesse was never stable to begin with, and that only got worse in Valnesse's recent civil war. Dorram Arel pressed an ancient claim on a border province and the conflict there has been back-and-forth for over a year.

16. How about gladiatorial arenas complete with hard-won glory and fabulous cash prizes?

No. Aside from tournaments, horse racing is the phenomenon in Pelyria. (And there is a lot to be made on gambling.) Gladiatorial combat would be considered barbaric.

17. Are there any secret societies with sinister agendas I could join and/or fight?

The Brotherhood of the Black Fist definitely qualifies. There is also the Decanari, a secretive group of criminal organizations that has a generally bad attitude about things.

18. What is there to eat around here?

Farwater, being a lakeside town, eats a lot of fish. Mainly trout and catfish. The staple grains are barley and wheat, eaten either as porridge or as coarse brown bread. During the growing season, carrots and peas and onions are frequent additions. Pickled carrots are eaten throughout the winter. Fruits are quotidian - apples and pears and grapes.

19. Any legendary lost treasures I could be looking for?

There are ruins from the Acradian Empire that have ancient treasure.

20. Where is the nearest dragon or other monster with Type H treasure?

There's a dragon in the Fazren Hills.
Posted by Wayne R. at 1:49 PM No comments: 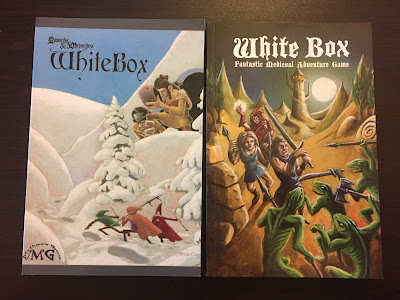 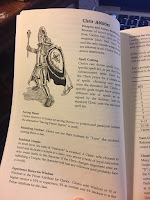 This is a complete RPG for $6 in print, and captures much of the earliest edition of D&D in 166 pages at 6"x9" size. It's a good update of Swords & Wizardry Whitebox, which has sat fallow for years, and if I may have liked a further-going revision, this one is welcome. I'd recommend it over the original, particularly in the Stefan Poag cover. The edits and updates make me feel better about it as a complete game that could be run by a referee with no experience with OSR or older D&D games.
Posted by Wayne R. at 11:25 AM 6 comments: