Day 17 brings us around to Round 2. I'd like to thank everybody who has been taking part in the discussion and voting, it has really been a fun project to go through all of these authors. In Round Two I'll touch more on their impact and legacy. You can see from the bracket above that Appendix N is ... well, it's top heavy. We have some real thrillers of match-ups in the second round and going forward, though, so buckle up.

Round 2 begins with: H.P. Lovecraft versus Manly Wade Wellman. 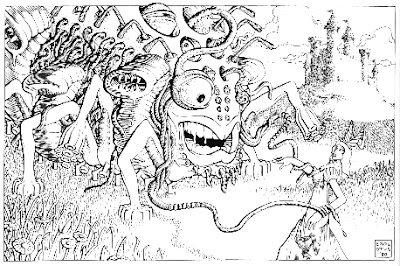 It's hard to remember that Gary Gygax was mentioning a moderately obscure pulp author when he listed H.P. Lovecraft in Appendix N. Cthulhu was not yet a worldwide phenomenon (certainly plush versions were not available) who was a sort of cult figure known and admired among many fantasy and horror authors.

Of course, decades of relentless popularization and imitation have changed that. Now "Lovecraft" or "Cthulhu" is shorthand for "tentacles and madness." His vocabulary mistakes have metastasized; "cyclopean" seems to mean mammoth or simply haunting rather than a specific type of architecture, and "non-Euclidian" doesn't just mean doing geometry on a globe or other surface.

"Cthulhu" is a genre of writing, with two or three anthologies being published each year, some addressing specific Lovecraft stories, others trying to capture the strange vibrations of his cosmic horror. But CoC Sandy Petersen on a recent interview with The Good Friends of Jackson Elias described his allure, which I think few of his imitators grasp. Lovecraft's protagonists resist the reality of the cosmic horrors that they face so obstinately that the reader comes over to Lovecraft's side and roots for them to believe, rather than requiring their own disbelief to be overcome. It's quite a trick.

If you think American folklore is rich gaming material waiting to be tapped, the Silver John stories by Manly Wade Wellman are among the best sources you can find. And if your tastes run toward Dungeon Crawl Classics, Michael Curtis created a setting in the module The Chained Coffin that is a long love letter to John the Balladeer and his adventures. (The module also contains a small gazetteer and several mini adventures set in the Shudder Mountains.) Wellman's work would also be a sound basis for a Call of Cthulhu campaign that wants to deal more with Satanism and the "traditional" occult than with Lovecraftian horrors from beyond space and time.

It's a bizarre cosmic coincidence, by the by, that today's episode of Ken and Robin Talk About Stuff mentioned Wellman in the context of understanding American folk magic. Ken Hite, in discussing the German-American magical grimoire The Long-Lost Friend for a "Ken's Bookshelf" segment, compares it to the Silver John tales as a source of understanding this type of magic and its Biblical and occult origins.