In the closest vote yet, and the first proper upset, Manly Wade Wellman edged out A. Merritt by 25 votes to 23 votes. He will advance to take on H.P. Lovecraft in the second round.

Day 10 of Appendix N Madness takes us to the Fantasy region and brings Robert E. Howard versus David C. Smith. 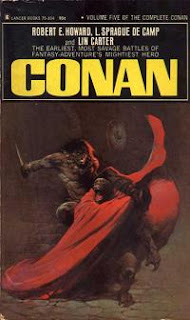 In 1936, Weird Tales faced a major tragedy when Robert E. Howard, a rising star at only 30 years old, took his own life. Only four years earlier Howard had published the first tale featuring Conan, a Cimmerian, in the hypothetical Hyborian Age. Howard was a Texan writer who created adventure fiction at a blazing clip, writing hundreds of stories in his short career. Kull of Atlantis, the Puritan Solomon Kane, the adventurer El Borak, the boxer Steve Costigan, the Pictish king Bran Mak Morn, the detective Steve Harrison - Howard created reams of characters, but Conan with his sword and low cunning towered above all of them. The Howard revival of the 1960s, driven by L. Sprague de Camp publishing the Conan stories in paperback form, created a positive mania for "barbarian" characters that lingered to the 1980s and a film Conan the Barbarian. 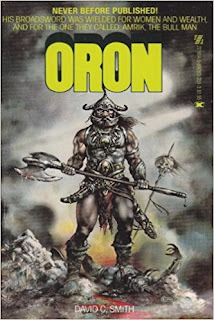 David C. Smith was a young author who wrote in the late years of that barbarian craze, publishing Oron and multiple stories in the Swords Against Darkness series (which is why he's in this competition). In the early 1980s, he co-wrote a series of Red Sonja novels with Richard L. Tierney based on the character as developed by Roy Thomas. There was a loose Howardian origin but Red Sonja was defined primarily in Marvel Comics. The Red Sonja film was not based on the Smith/Tierney novels. Smith has kept writing since the 1980s but at a slow pace, and remains a minor working writer, with a trilogy (Fall of the First World) and several other novels.

As an editorial comment, this is the most unfair matchup in the entire Appendix N Madness tournament. Not only did Howard write far more in about eight active years than Smith has in forty, but Smith's entire career has been in Howard's shadow.