The winner for Day 3 of Appendix N Madness was Andre Norton, defeating Sterling Lanier 68% to 32%.

Day 4 brings us to the SAGA / Amra region. Today we see #3 Roger Zelazny vs #6 Gardner Fox. 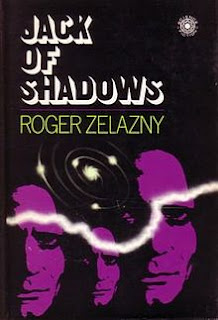 Roger Zelazny (SAGA member) was an author who loved to write books that were in questionable ground as to whether they are fantasy or science-fiction. This is physically true in Jack of Shadows and is more or less the main theme in Amber. His writing was often dense with mythological references and godlike characters, but stylistically often reads like modern detective fiction. His Amber series explores the possibilities of an infinitely varied multiverse, and took long detours through fluid surrealism as characters move through Shadow. George R.R. Martin called Zelazny a "Renaissance man." 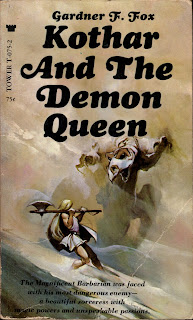 One of the hardest people to fit in this tournament is Gardner Fox. He was a tremendous comic author, and created the Flash, Hawkman, Sandman, Doctor Fate, and a whole variety of other superheroes. He also was the person behind the Justice Society of America and the Justice League. But he appears in Appendix N for two series of "barbarian" novels he did in the late '60s and '70s, Kothar and Kyrik, that are at best mid-range examples of their genres. He wrote two minor science-fantasy novels, Warrior of Llarn and Thief of Llarn, but his literary legacy is not large and has long since fallen out of print. His comic book legacy is tremendous and wide-ranging. Individual voters will have to decide whether to treat Fox as a "literary" author or as a comic author, or both.