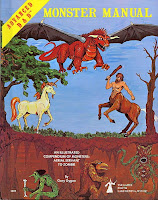 In 1977, TSR released the Monster Manual. This was the first hardcover AD&D manual, and established a number of things. First, TSR became dominant in the market; the Monster Manual quickly outsold its more ecumenical competitor, Chaosium's All the World's Monsters, which had a great number of weird and "gag" monsters. The Monster Manual contains copious statistics for each creature featured, many of them totally useless, such as the dozens of entries reading "SPECIAL ATTACKS: Nil; SPECIAL DEFENSES: Nil; MAGIC RESISTANCE: Standard." Other entries contain lines of questionable utility like "SPECIAL ATTACKS: See below." It is fine to have a template that informs the referee of special attacks, but it's almost never put to use, and even when it is the detail is repeated in the monster's text block below.

The Monster Manual contains many of the classic creatures that are iconic to D&D. James Maliszewski talked at length about the curious sense of naturalism in the book. It seems unfair to beat up on this book, but I think some of the choices made by Gygax had a limiting effect on the evolution of D&D and fantasy gaming in general.

By sticking with hierarchical lists of various types of creatures (demons, devils, dragons, and humanoids), Gygax wound up creating not examples of how to implement a concept, but canonical creatures. D&D's various monster types became a huge part of its current intellectual property, and many have leaked into fantasy more generally. If I could insert my own Monster Manual into history in place of Gygax's, I would have replaced particularly demons, dragons and the humanoid types with baseline examples and tables to create variations from there. For instance, orcs would be just one implementation of humanoids, but many others could be generated. Dragons would no longer be color-coded, and demons would be many and varied.

At the same time, I think the human types are somewhat limited. I like the concept that OD&D's "Evil High Priest" has Finger of Death and other reverse-cleric powers; rather than relying on the spell list I would have preferred a monster book that has human types like Evil Priest, Witch and so on that have more unique powers. Even the leveled NPCs could have made really interesting human encounters.

In OD&D, Balrogs were "boss" monsters. Despite the named demon and devil lords, I don't think AD&D managed to reproduce the feat. They are too remote, too distant, to take that role. You'd never put Orcus on a random encounter list, but the OD&D list had balrogs on it. Re-creating this would have been another goal in changing the Monster Manual.

But the real shame was that the Monster Manual unceremoniously dumped all the science fantasy elements that had been in OD&D. The various Martian creatures are more understandable given the Burroughs estate's tendency to sue over various slights, but the lack of the androids and robots described in Monsters & Treasure is not. By leaving them out, I think the Monster Manual ultimately situated AD&D in "high fantasy" whereas OD&D had been a bit more ambiguous; this not only hurt D&D as a game, but stopped it from becoming a force against that genre of fantasy's rise in the late '70s and through the '80s.

I do wonder if there may be something to an alternate bestiary that is an alternative Monster Manual, as outlined above. I would have to think it would start with the OD&D monsters but rethink the humanoids, and add several categories of creatures that are based on adding elements to a template – dragons, demons, robots, and so on. I think this might be a good compromise between "standard" and "unique" monsters that has been a tension in the OSR.
Posted by Wayne R. at 8:27 PM