Blackmoor and the Early Levels of Dungeons 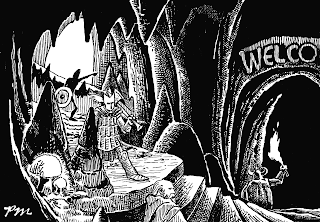 In running Stonehell, I've been given to thinking a bit about megadungeon design - and low-level dungeon play in general. The overall pattern of published dungeons, following the rules for populating a level in the D&D rules, tends towards a fairly high concentration of presumed combat encounters. The modern megadungeon is inclined to have more empty rooms, but it still presumes a fairly high degree of combat, sometimes with new inventions and other times with the cursus honorum of humanoids. All this tends to lead to a pattern of short bursts of exploration punctuated by monster fights.

But if you look at the original dungeon, Blackmoor Castle, as presented in First Fantasy Campaign, it's nothing like that. The first level is very sparse - there are nine rooms, only a few of which have combat encounters. The ones that do have large combat encounters - 60 goblins between two rooms (marked 9C and 9D), another with 16 goblins, one with 32 kobolds. But there are nine or ten ways down, and at least five or six stairways up.

One aspect of this I find interesting is the volume of monsters. Sixty goblins, sweet merciful crap! Older D&D is a game where numbers matter, and that many goblins will overwhelm any party you can throw at them. It makes some other tactical solution more or less inevitable, at least after the first TPK when players knock down the door and charge in. This lets the dungeon have adversaries and factions without stringing them through a dozen or more rooms to make them manageable.

This also makes good logical sense. Who is most able to survive in the first level of the dungeon, most vulnerable to raids, small enclaves or large masses of cannon fodder?

The number of entrances and exits, likewise, is stellar. Figuring out which way to go into a dungeon is important when there are rooms with sixty goblins in them! This also encourages a style much more in line with early megadungeon play, where instead of leveling up carefully on the first floors, players would go as deep as they could and get the best treasure they can find. Making the first level less of a place for accumulating levels and more of a passageway down really creates a different dynamic from the dungeon that I think is worth exploring.

Of course, Blackmoor is a first, and as such doesn't have everything. The FFC notes very few "weird" rooms, which I think should be features of the early dungeon levels. Traps, statues, pools, odd features - pretty much what we see in the Dungeon Alphabet - should round out those early levels and make them strange and foreign, setting a tone much different from a monster-heavy place. In Stonehell, I find myself thinking I'd have really appreciated this style of dungeon; there are some really great weird rooms that kind of get lost in the shuffle because of all the rooms built more or less for combat, particularly in the grind-y Quiet Halls.

These are lessons worth considering for megadungeon design. None of it means that big, sprawling levels are in any way inappropriate. It's just that there are other models for first levels that I think we should look at, and think about in terms of dungeon design.
Posted by Wayne R. at 8:38 PM