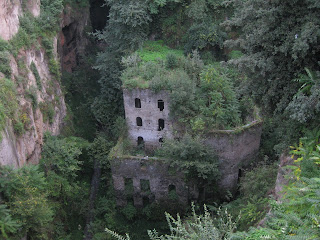 You may have already seen pictures of this abandoned mill in Sorrento, Italy. As I've been developing a dungeon recently, I've really been reluctant to put the classic "castle" above it. The reason for this is mainly in terms of my own concept of the dungeon, which started life as a classical "dungeon" beneath an ancient fort no longer in existence, and subsequently grew kobolds, who began the expansion of the dungeon into a far vaster and more labyrinthine complex.

The mill you see above has been abandoned for a hundred and fifty years. It's inherently unsafe, and in all likelihood most of the floors are going to be rotted out. In D&D terms, we're mostly going to be interested in the ground layout and maybe what's on the roof - though judging by all that foliage I don't think even that is going to be in tact.

There's a great photoessay here where you can see more of these pictures. To me, that place has just got to be infested with giant spiders and horrible things, making the dungeon exit and entrance more difficult. All the foliage also allows an area where there are some true 3-dimensional concepts, with some different things hiding above, and maybe some treasure hidden on floorboards that are rotted and inaccessible by mundane things like walking.

One factor I find really important in dungeon design is the multiple entrances. Technically there are a couple in Stonehell, but the big central entrance is something I think should be avoided. The mill is one of two entrances to my dungeon's first level; the second is going to be accessible by a cave with some other threat lurking in it. Generally I find that if you make access easy, it tends to make a shorter "workday" viable - where PCs spend their resources and head back out of the dungeon.

(As an aside, I really don't mean to rag on Stonehell. It's got some excellent content, especially for living dungeon experimentation that is going to play a big part in my next session. But at the same time, it's got flaws of structure that I do think impact on play.)

A lot of strategic concepts can come out of an interesting ruin like this mill above a dungeon. PCs might take measures to clear out the mill, or even burn it down to make dungeon access easier. They could rebuild it and make it a redoubt, or use it as a place to salvage materials for dungeon delves. Having a place above a dungeon instead of a massive entrance, I think, is really worthwhile. I also would encourage folks to go looking for things like ruins and massive stairwells. I plan to have a massive stairwell leading to one of the deeper levels.

As a final note, I think some really evocative pictures that are going around are tremendous inspiration for this. I'd be interested to see more pictures that inspire you to say, "What dungeon is beneath that place?"
Posted by Wayne R. at 11:38 AM