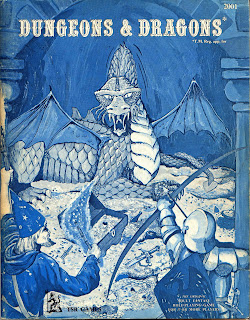 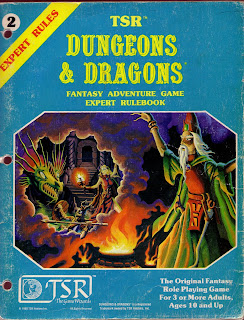 I've long had a love for Holmes basic D&D that is second only to my love of original D&D for inspiration. At the table, Holmes is simpler and cleaner in many ways, but it requires some expansion past 3rd level. The easiest way to do this is what I call "Blue Book" D&D - Holmes Basic plus the Cook/Marsh Expert rulebook.

This is discussed in the Expert book, but that takes the boring and prosaic route of overruling everything from Holmes with a quick Moldvay-like hack. I want to talk about another way to do it that doesn't take either 100%.

First: I prefer the Holmes attribute charts. They de-emphasize high attributes that most players with 3d6 stats won't have. However, I'd make three adjustments toward Moldvay. For Strength, 8 or less gives -1 to damage and 13 or more gives +1. For Wisdom, same thing for saving throws versus magic. And for Dexterity, no AC adjustment but apply the ranged modifier to initiative, which I'll get to. Intelligence, Constitution and Charisma work exactly as in Holmes. This gives each stat a use without making 18s the be-all and end-all.

Second: Keep the Holmes division of race and class, but allow players to be the Elf class from the Expert book. All the benefits of race-as-class without the drawbacks.

Fourth: All the scroll and spell learning rules in Holmes are drastically better than in Moldvay. For the rest of magical research, follow the rules on X51. These changes will make low-level magic-users much more useful.

Fifth: In combat, my current thought is individual 1d6 initiative with a Dexterity modifier equal to the ranged attack modifier. This saves the referee from having to roll Dexterity for every single monster, and is a synthesis of Holmes Dexterity-based initiative with B/X's 1d6 system. Variable weapon damage should be considered. While it's easier to roll a d6 for everything, players enjoy rolling their funky dice and monsters usually have damage listed anyway. Finally, parry from Holmes and morale and defensive movement from Expert round everything out. Most morale scores can be eyeballed by using a value from 6-10 depending on how "reliable" the referee thinks the monster should be.

Sixth: Follow Holmes in using only "Remove Trap" as a thief skill. "Find Trap" takes a whole lot of fun play straight out of the game, and the damn thing is a pathetic roll at low levels. Parties have a much better chance to find traps by actively searching a room than by the thief giving them a 10% chance.

Seventh: Elsewhere, let Holmes trump Expert, which fills in the blanks. If anything is missing, I would recommend going to the Ready Ref Sheets, which really complement Expert's wilderness rules quite well when you have to design an interesting locale on the fly.

Eighth: Print out this sheet from the Zenopus Archives, one for the referee and one per player. It's a great reference and will save a lot of page turning.

What I really love about Blue Book D&D is that the differences between the two books provoke choices, and in resolving those differences you wind up fine-tuning your own D&D. Whether you like or dislike race as class, or Dexterity-based initiative, or variable weapon damage, or Strength bonuses - it's all there, and you can pick the tools you like and leave the others behind. A whole range of classic D&D styles can be created just by interpreting how these two books go together.

Of course, from here I think there are a lot of interesting house rules to be made. But that's one way to start with Blue Book D&D.
Posted by Wayne R. at 12:12 PM