Pacing in the dungeon and within levels 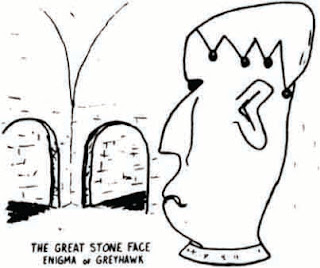 So far in my discussion of dungeon pacing, I've focused on the pace of entire levels. In an actual dungeon, though, the basic principles of fast and slow can be applied on a smaller scale. The quick and easy way to do this is sub-levels; you could pretty easily build a fast main level that has two or three really interesting slow sub-levels, where monster lairs or treasure caches are located.

But I'm not talking about sub-levels here, I'm talking about fundamental dungeon design. A dungeon can be described in a Melan-style diagram, with the basic types outlined below:

Dungeons are directed graphs composed of rooms. Any sub-set of rooms can be considered a section if every room in the section is accessible from every other room without leaving the section. A section of rooms is considered a closed section if there is only one way out of it ("sidetracks" in diagram B above) or a complete section if there are two ways in and out of it (such as the side-path in "D" above). A complete section may be blocking if it is the only way through to a goal (treasure, stairs down, etc).

Fast levels and sections are the connective tissue of the dungeon, the pieces that let everything else hang together. The crucial factor for a fast level is that there are no blocking sections that require extensive interaction with the dungeon environment. In a well-Jaquayed dungeon, a fast level will look like model C above, with each node leading to a path down. A fast level can have slow sections, but as a rule they should be closed sections. A slow section of an otherwise fast level will act as a sub-level, and can be a portion where play hangs up. This can be good or bad, depending on what the referee wants.

Slow levels and slow sections are, as I said yesterday, the meat. Let's look at a good example from Melan's original post about what a slow level's graph should look like:

This is a very challenging "faction level" of caverns, and there's good treasure to be had at many of the nodes. It's possible to get to the 10,000 GP hidden gem in the mushroom garden without going through any of the lairs, although you get mighty close to the trolls. Expeditions into this level should be tactical, with the intent of bringing down a certain type of enemy, rather than wandering about which is bound to get you killed. In a megadungeon you'd hopefully have more than one route in, allowing PCs to reconnoiter and pick and choose.

But if you notice that long horizontal line in the center of the diagram, that is a massive cavern that takes up the bulk of the map in D1. That is a fast section of the level, propelling the PCs into exploring any of the slow regions. The troll regions are blocked twice, while the area with the lich and the ghouls is a complete section that doesn't do any blocking.

Now, this is a Gygaxian tournament dungeon and not a megadungeon; if it was, it would not have every room taken up by monsters with treasure. Still, a well-built slow level in the megadungeon will generate a diagram broadly similar to this. What we can take from it is that slow levels offer multiple paths, and some goals will be blocked while other paths will lead to closed sections or complete sections.

Fast sections in a slow dungeon level tend to translate into long lines in the Melan diagrams, and the designer has to be careful not to let them turn the level into a simple linear design with multiple branch-offs. Instead, they should be used to enable the kind of big circular routes that we see in the D1 diagram, creating lots of alternate paths that can be tactically interesting for players seeking treasure.

The reason to alternate between fast and slow dungeon levels is that time spent exploring the dungeon should be a tactical decision. Slow levels are defined by treasure and obstacles to that treasure. Every round spent in the dungeon has the risk of drawing a wandering monster, and every room entered contains potential risks. A well-paced dungeon is one where players can intelligently make these decisions, because the fast levels and sections are either not worth exploring in detail, or are actively hostile to such. Slow levels and sections, the meat of the dungeon where the interesting encounters, obstacles, and treasures are located, are spaced out by fast areas that clever players can cross without detailed exploration, and possibly use as multiple attack routes for the slow areas.

So I think that covers my thoughts on pacing. Next I want to take another look at non-linearity in dungeons and how that impacts the potential for exploration.
Posted by Wayne R. at 4:09 PM