Megadungeons, Treasure Maps and the Importance of Goals 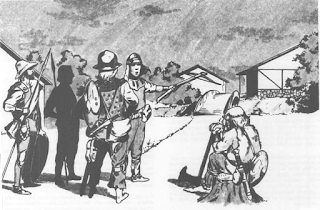 Maps are a regular OD&D treasure type, directly on par with magic items, and appear in various incarnations throughout the treasure tables of subsequent editions of the game. These maps could lead to treasure, magic items, or both. I think they're something of a lost art in modern old-school games.

Published megadungeons tend to rely on what we can call the "B-Series Model" for giving advance information about their contents: there is a chart with some rumors, some true and some false. That's very nice for a level or two of monster-bashing, but in a megadungeon complex it's radically inadequate, both in quantity of information and depth. I think you get better exploration with a specific goal in mind.

Now, what I'm talking about here is very far from the plots of typical adventure modules. For instance, you might have something as simple as a set of directions that lead you to a treasure room. The fact that they're sold by an old and kind of seedy man in town shouldn't matter, right? Neither should the fact that what was a legitimate treasure room forty years ago is now a nest of giant fire ants. If the referee is of a mind to be fair, they should give some indication that maybe the room is no longer a treasure trove, maybe a graffito like "KILROY WAS HERE" indicating that the area has been explored.

Giving out the right dribs and drabs of information can make the megadungeon rich in several ways. First, information can be incorrect in subtle ways that the dungeon works against - for instance a map based on a classic shifting hallway can have interesting inaccuracies. Information can be outdated in good and bad ways, or someone's path through the dungeon may have missed a really interesting side area. Most importantly, it gives a sense of purpose beyond "we're looking for treasure, I think it's around here somewhere."

I also think there are certain elements in dungeon design that can lend themselves well to this. For instance, maybe there is a massive chamber with an enormous statue on the fourth level; this could be a landmark that opens up three or four possibilities since previous explorers have used it as a point of reference. Or, more devilishly, there could be two such statues on the fourth level, with one of them being a trap set by some dungeon denizen.

Of course, there should be diverse ways of getting at this information. Previous delvers might share some details for coin or ale, current denizens can be interrogated or bribed for information (with varying levels of success), sages might find out details about how the dungeon was in its halcyon youth, diviners may be able to scry a juicy tidbit. These can also be rewards in the dungeon; for instance, you find the bones of an adventuring group with their maps to date, except the spider that killed them is still around and hungry.

For future published megadungeons (and for the unpublished efforts people are working on), I think having a list of potential clues and a few maps / diagrams that can be used as handouts would be invaluable. Revealing a bit of the megadungeon to draw players along can be a really rich piece of the game.
Posted by Wayne R. at 9:41 AM