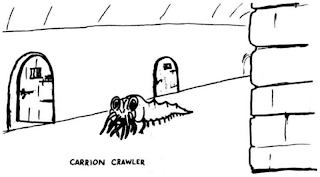 The easiest way to make a level fast is to increase the number of exits. If you stick multiple sloping corridors, staircases, chutes and so forth on a level, it makes it more and more tempting for players to go down to the next level. The more accessible these are (i.e. not through multiple rooms full of monsters), the faster players will tend to try and venture deeper. This can be done through quantity and layout.

Staying within layout, small size and straightforward layout both make a level faster. Obviously you can have a complex small level with a geomorphic layout, and that would slow things down a lot. Likewise a straightforward layout doesn't help if it's a straightforward grind. A series of long hallways with 10'x10' crypts that monsters burst out of is a tremendously slow level, as anyone who's run the Quiet Halls in Stonehell can attest.

The next way to do it is the sparse level. Some parties will see a sparse, relatively empty level and freak out, expecting it to be a deathtrap; and perhaps it is. In fact, I think that's really the only way to make a mostly bare sublevel a compelling dungeon addition. But if they go over it in minute detail, it's a danger of a lot of tedious sessions.

A level could be interesting but pose abnormal problems for investigation. For instance, what if a level is mostly flooded to 5' but the stairways down are accessible? There could be a lot of interesting stuff beneath 5' of water, but the logistics of it would be difficult. (And there may be lifeforms underneath.) Similarly a level might have some property such as magnetic walls - PCs with metal equipment would be well behooved to get out quickly. It could be something that starts when you enter - such as unavoidable pressure plates at each entrance that begin the level filling up with water, and getting out is a priority.

Beyond all this is the question of what lives in the dungeon. Total disregard for "level appropriate" monsters is one way to make a dungeon level fast; a medusa or trolls in the first or third levels will definitely speed things up, particularly if their lairs are well marked in advance. Slow but powerful wandering monsters likewise might speed up the search for a way down in what otherwise seems like a promising level. I like these particularly because the level can, when the PCs reach higher levels, become a slow level that they go back and explore in depth once they're ready for the monsters.

Levels can also be sped up by treasure maps and knowledge. If the PCs know that the first level has been picked bare by other parties, but there is a really great treasure on the second level, then the players will go out of their way to make the first level fast.

Finally, a fast level can be one where PCs don't have the typical dungeon crawling motivation. A goblin market or a dungeon level populated by overwhelming rival factions can be set up to encourage players to bypass it entirely, treating it as a semi-town rather than as a typical level of the dungeon.

I want to do at least two more in this design series: one about what makes a good slow level, and one that deals more with pacing, including changing the speed within a single level..
Posted by Wayne R. at 4:14 PM