Goings on in the OSR

Since my regular game got postponed AGAIN, I wanted to take the time to post some things about what's been going on in the old school renaissance lately.

You can buy Jim Raggi's module Better Than Any Man in PDF from RPGNow for any price you want, including free. I backed this module on Kickstarter so I'm hardly an impartial judge, but it is seriously impressive. I got my copy at Free RPG Day and was thinking of writing a review, except that reviews aren't a regular part of this blog and I don't really intend to start. This is a detailed sandbox module with a central town, several dungeon settings, and a built-in timer so PCs can't lollygag through the plot. This is a trend with Raggi, who wrote The God That Crawls to have a dungeon race instead of a dungeon crawl. It also has a number of new spells that you really do not want to ever have to use. All magic in LotFP seems double-edged.

I really like BTAM's sandbox style of presentation. The module has loads of plot in it, but there is nary a drop of railroading to be found. All the plot has to be emergent from players interacting with the world. Now, there are two things that are less than comfortable in the module - one, it more or less encourages roleplaying out some debauchery in the section about the Joy in Karlstadt, which is honestly a bit juvenile. Two, it does a two-page spread making cannibalism explicit, which seems gratuitous. But Raggi has worked out a niche where épater la bourgeoisie (shock the middle-classes) is a commandment, so at this point it's just expected that something unsavory will be in there.

I'd like to play the module specifically because the second half (the dungeons) make the first half (the town) feel mostly like a bit of a red herring, and I want to see if that is borne out in play. Oh, and if you get to the end, a near-TPK is inevitable.

Then there is Scott Moberly's AFS zine, issue 3. This is a print-only zine that has two adventures, some monsters and magic items, some fiction and a couple of articles, all in a sword & sorcery vibe. You have to get this issue, if only because of Benoist Poiré's module. Scott put the map up online, and it is gorgeous. Look: 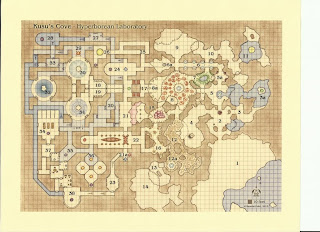 Probably one of my absolute favorite dungeon maps since The Original Bottle City, which is another gorgeous thing. Benoist's module is written in a "this is how I used it, this is how you might use it" fashion which I'm not sold on, mostly because the "how you might use it" (called IYC for In Your Campaign) notes would have done better as a single section rather than repeating on every single room description. But it's a fresh, clever module with some really wild ideas in it. But I swear, I could buy a book full of maps that look that great. Even without any keys, it'd be worth every penny. 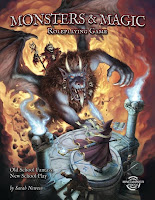 One other thing I wanted to comment on. A recent game called Monsters & Magic came out that tries to add some "modern" mechanics to a game that is old-school. Which isn't a bad thing, but it bills itself as an OSR game - and it's not. To me, the OSR is more about play than the trappings. We have hardcore sword & sorcery, horror, gonzo science fantasy and high-magic, post-apocalyptic, all kinds of flavors but have remained clustered around play that you could reasonably say comes from a TSR-centric pre-1986 mold, even when using post-1986 materials like the Rules Cyclopedia. M&M, to me, misses this point in the OSR, by trying to keep some trappings but fundamentally change the play.

None of this is to knock the game or its creators. I haven't played it, and it looks like it's fun if that is your bag. But it's really made me think about what being part of the OSR means, and I think more than anything it means a shared set of assumptions about the way we play.

Finally there's what is coming up. Dwimmermount should come out in the next few months, and Stonehell; it's not just because I'm running the latter that I like it better as a megadungeon. LotFP has a lot due in late July, with its Rules & Magic hardcover, Vincent Baker's Seclusium of Orphone of the Three Visions and Kenneth Hite's Qelong adventure. We should be nearing a penultimate issue of Fight On!, and my own Dungeon Crawl should be releasing around the beginning of August.

So that's what I've got about the OSR. I'm curious what other folks have found interesting and/or are looking forward to.
Posted by Wayne R. at 10:09 PM