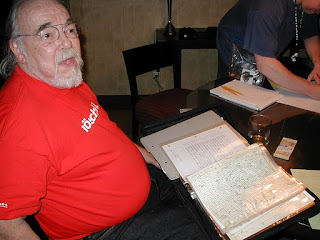 More time running Stonehell and thinking about Blackmoor has me considering a certain principle of dungeon design that I think can be best summarized as "fast" and "slow" levels of megadungeons.

A lot of what we see in the field of published megadungeons are composed of slow levels. I think the reputation of Gygax's early levels (such as the one glimpsed in the photo above) and the general desire to have big maps had a definite influence on this. By a slow level, I mean a level that encourages a party to spend multiple sessions exploring it and finding its secrets. Big levels tend to be slow, but a small level with a lot of rooms and secrets and not many passages down will also be slow. Most sub-levels will be small, but slow, levels.

Fast levels, by contrast, are levels like the first level of Blackmoor. They are designed to encourage the PCs to get through quickly and down to another level. A fast level isn't necessarily a small level; a level with a few big cavernous rooms could be fast if there was nothing in particular to keep the players in full-on exploration mode. Likewise, a level where some local condition makes in-depth exploration difficult or dangerous could be fast.

There is a lot of value in having slow levels; this is where much of the meat of the gameplay will take place. I think the error in modern megadungeon design is an assumption that every level should be slow. We see big intricate maps and think - "I want that in my dungeon." It's understandable. And I think Barrowmaze represents the extreme end: a first level so massive it has its own book. That is a slow dungeon level.

One reason I think good design should lean more towards fast levels in the early parts of the dungeon is that low levels shouldn't always be a grind. The average OD&D piece of jewelry is worth 3,410 gold pieces. There should be jewelry in one out of 15 rooms on level 2 based on the chances of finding jewelry, and there should be 3.5 pieces on average. On average it will be worth 11,935 gold pieces and at 1 GP = 1 XP, that's almost enough for 6 characters to gain a level, more than enough if they have prime requisite bonuses. So in theory, a dungeon should have a single treasure on the second level that first-level PCs can go in, get it, get out, and come back second level. If that second level has 30 rooms, it should have two such treasures, which will get the PCs to third level.

Now, that might require some reconnoitering and planning to extract with a minimum of PC deaths, but that's the nature of the game. I think the ideal pattern for a megadungeon would be a fast first level, a big slow second level, and then two fast third half-levels that each lead to different paths down. After the third level, of course, things begin to be weird.

I have some more ideas about fast levels that I'll get into detail on, hopefully later this week.
Posted by Wayne R. at 7:41 PM