Celebrate Wednesday with a frog-man variant for Swords & Wizardry! 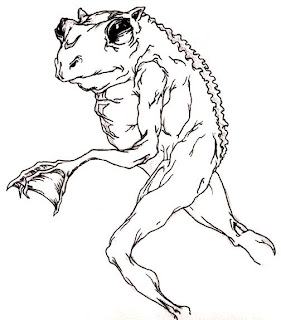 Loveland Frogs live in remote swampy environs. These are small (3') bipedal creatures that resemble frogs except for the facility of their hands. They are occasionally mistaken at a distance for extremely ugly halflings, with wrinkled bald heads. They are social creatures and travel in small groups, usually between 2 and 5. Their preferred attack is to ambush solitary travelers or small groups by the side of roads or paths, always at night.

Owing either to magic or some rudimentary technology, these frog-men have relatively sophisticated devices in the form of metal rods. When activated, such a rod gives off telltale sparks, and if used to attack an opponent cause 2d6 electrical damage (save for half). However, a given rod only works if the referee rolls 1-4 on 1d6. A result of 5 or 6 indicates that it will not work for at least 24 hours. Each activation lasts for 2d6 rounds, and a rod should have 1d10 activations remaining before it needs to be recharged (magically or technologically, at the referee's discretion). Only one in three frog-men will have such a device.
Posted by Wayne R. at 7:59 PM