In honor of the middle of the week, I write up a cryptozoological horror for Swords & Wizardry. This one is too odd to pass up. 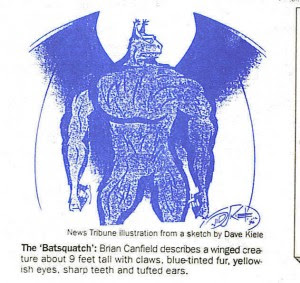 The batsquatch is a creature similar to the elusive sasquatch, and preferring similar hunting territories in temperate and sub-arctic forests and mountains. It stands nine feet tall, covered in bluish fur, and has bird-like claws on its feet. The massive leathery wings on its back are fully functional. Its legs are powerful and muscular, and the knees bend backward, giving it an unearthly gait when it walks. The yellow eyes have half-moon pupils and darkvision.

In the wild, the batsquatch is often hunting, and will attack intruders into its territory. If it is encountered from a distance it will pick up large rocks and throw them for 2d6 damage each. Once engaged in melee combat, the batsquatch lashes out with its long, fierce claws. If a single opponent is hit by both claws in the same round, the batsquatch can squeeze them for 2d6 extra damage.

A batsquatch is a solitary creature. There may be more than one, but no groups are ever spotted together. The batsquatch does not speak Common, but it does speak a variant of the sasquatch language and can be understood by anyone who speaks Sasquatch.
Posted by Wayne R. at 6:12 AM