The Biggest Monsters of All 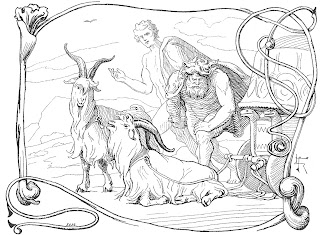 It causes much consternation and clucking of tongues when gamers point out that both Supplement IV: Gods, Demi-Gods and Heroes for OD&D and the fourth AD&D hardback, Deities & Demigods, are basically the Monster Manual on steroids. This also follows suit for the Judges Guild supplement Unknown Gods which follows the same basic format, and of course its OSR follow-up in Petty Gods. Each carries with it the implication that gods are fundamentally killable things.

Now, there are rationalizations, such as the idea that gods have "avatars" that appear in the mortal world periodically. That's kind of lame - you go through all this trouble, beat a god, and are told that you just killed something temporary and the god is still in its realm doing its thing. It smacks of cheap GM tricks, saving a favorite NPC and taking away player agency.

My own thought is that gods should be immortal but not invincible - therefore able to be killed. It should be hard, and for the most part it is extremely hard. That's the point: gods are tough but not impossible opponents. They get to "cheat" in all kinds of fantastic ways, because in no way should fighting a deity ever be easy, but I think it's a major violation of the source material, if nothing else, if you can't kill a deity.

Elric and the Eternal Champions kill gods. Gandalf slays the Balrog of Moria, which is technically one god killing another (both are Maiar, which are the equivalent of the Aesir in Tolkien's cosmology.) Gods sometimes go hang out on the Street of the Gods in Lankhmar, and if you wanted you could almost certainly kill some of the gods in Lankhmar (not the Gods of Lankhmar), in some cases possibly with a stout stick or a strong breeze. Lovecraftian entities are never clearly unkillable, although it may be extremely difficult for humans. Except for Eru Illuvatar in the Silmarillion, gods in the source literature are never actually theological in the medieval sense. So why couldn't they be killed, assuming you can pin them down to a fight? Not to mention the myths themselves; the deaths of the Norse gods is baked into the very idea of the Twilight of the Gods

It raises interesting problems. When the gods are killed, what happens to their clerics? Do they have to consecrate themselves to new deities? That could be an interesting problem, and a potential seed for an interesting adventure if a cleric has to go and save his deity's eternal life from an evil cleric or wizard. It also would be reflected in the worship of deities, as the ones who can't realistically defend themselves would have fewer clerics.

This really implies that D&D has a sort of Lankhmar-esque system of deities, where gods start off weak and grow stronger as they accumulate worshippers. Heroes at high levels might be able to tip the scales and themselves become gods (even without leveling from 1-36 twice as per Mentzer's Immortals rules). Becoming a demigod after a long and legendary campaign seems ultimately just; maybe even letting a beloved old PC come out to defend himself if challenged by future PCs...
Posted by Wayne R. at 3:19 PM