For most of my gaming career I've never really cared about the saving throw categories in old school D&D and AD&D. They're not really great for abstracting or expanding the concepts they cover. Well, okay, I've always loved that there is a save against 'Death Ray" in OD&D. But mostly the categories left me cold,

But what I noticed when I was looking at OD&D's saving throw table recently was the general trend of the numbers. Take a look. 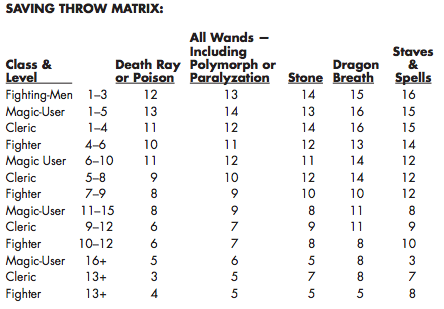 Without getting fancy about it, the OD&D chart has a clear tendency to have lower numbers on the left side of the chart. Sure, it's a little backward with high level magic-users, but for the most part the easier saves are further to the left. And at the same time, these are the saves that are more likely to take a PC out of the game. A fighter with decent hit points can take a Fireball or the breath of a smaller dragon on the chin, but poison and Finger of Death are save or die. And polymorph / paralyzation is a remove-from-game save.

The charts in AD&D are surprisingly similar. The categories run: Paralyzation, Poison or Death Magic; Petrification or Polymorph; Rods, Staves, and Wands; Breath Weapon; Spell. Basically Gygax re-shuffled the things that are on the right and left, keeping all of the ideas that take PCs straight out of the game on the left, and ones that mitigate damage to the right, with lower target numbers on the left side of the chart. B/X D&D follows OD&D in the placement of poison and Death Ray saves, but moves paralysis over to the middle with Stone. Still, we see the general pattern at work.

No attempt that I've seen to rationalize saving throws has followed Gygax in this. Saving throws organized by the result of failure seems counter-intuitive and overly fiddly, even though it has the effect that fighters have a 45% chance to save versus poison, as opposed to only a 25% chance to save versus a Charm Person spell thrown by an enemy magic-user. Using, say, the Swords & Wizardry single saving throw, a fighter has a 35% chance of either, even though the fighter's player may well prefer the extra 10% against poison.

This isn't intended to be a deep observation, but I find that it salvages the saving throw categories from the earlier editions. It's certainly changed my opinion, which (before I looked at the chart and noticed the trend) had been in favor of the single saving throw.
Posted by Wayne R. at 4:32 PM