On Reading and Writing Magic 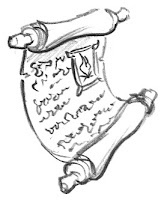 First off, I want to give a hat tip to D. Vincent Baker for his The Seclusium of Orphone of the Three Visions for inspiring this particular article. It's one of a number of new releases on the Lamentations of the Flame Princess store that were made available today.

From the original edition of D&D onward (Holmes copies the text almost exactly), Read Magic has been a fundamental spell for reading scrolls and generally "magic." Without it, the instructions on scrolls, spellbooks, wands, and so on are incomprehensible. In Seclusium, Vincent discusses how - and this is an "in his campaign" moment - there is something personal of the wizard wrapped up in his own writing, explaining why magic writings even in an age of print as assumed by LotFP are still hand-written. That's one way to do it, but I've been thinking of another.

As I see it, the words of magic-user spells are inherently magical. Uttering them is enough to tap into unknown energies and change reality itself. From there, the words on a scroll or in a magic-user's memory are in a semi-stable form, where they've been encoded in some way so that the magic-user has to interpret either the contents of the scroll or his own memory to transform it into the actual words. This form is based on a personal cipher that only the magic-user himself knows, and disappears once it is actualized. That's why the memorization isn't permanent: the form requires the magic-user himself to complete it.

The level of a spellbook has to go even further. Since the magic-user must be able to memorize the spell without it disappearing from the book, it has to be an encoded form of the already semi-stable form. This means that the magic-user has two personal ciphers, one for memorization and scrolls, and the second unique to his spellbooks. It follows that these ciphers themselves are also magical, and that writing with them takes a certain number of pages, words, diagrams and so on that, when read, will store the semi-stable form of the spell into the magic-user's memory without casting it.

From this perspective, the ciphers are "securing" the underlying spell in place. No magic-user knows another's ciphers; they are not just a secret, but something crafted as an apprentice that is as much a part of the MU as his arm. And that's where the Read Magic spell comes into play. Read Magic lets the caster read without casting, and what it's doing is the work of simultaneously deciphering the original and presenting a re-ciphered version to the magic-user as if it were written on his own scroll or spellbook. This allows, as per Holmes, for a MU who has read a scroll written by a different magic-user once to cast the spell from it without casting a second Read Magic.

One side effect of this is that magic-users who have Read Magic memorized has a 25% chance to spontaneously decode any nonmagical message written with a non-mechanical cipher (alphabet substitution, etc). Actually casting the spell and using it to read a mundane-encoded text is possible, but it's much too powerful; there is a 10% chance that doing so will cause a backlash that knocks the character unconscious for 2d6 turns.
Posted by Wayne R. at 2:54 PM