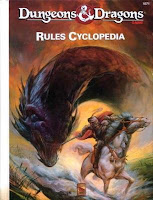 The D&D Rules Cyclopedia is available from D&D Classics as a PDF for $9.99, which seems to be an indication that the rulebook will not be getting the "premium hardcover" treatment from Wizards of the Coast. Still, it's encouraging that the book is back in circulation.

The RC had the distinction of being the first book to put all of Dungeons & Dragons into a single hardcover, collecting most of the B-E-C-M rulebooks into a single volume and adding some variants of its own. I think a big part of the love for it comes from the fact that it manages to be complete in one book and reflects the rules a lot of people (yours truly included) started off with. It also has the odd distinction of having all the interior illustrations done by Terry Dykstra, who also illustrated the 1991 beginner's boxed set. Much of the art is recycled between the two.

RC D&D is, in a way, a daunting prospect. Without mitigating the lethality of low-level B/X D&D in the slightest, the RC offers 36 levels, with multiple shifts between play models dating all the way back to OD&D. It preserves the "endgame" in a serious way, working in mass combat rules that we used in several occasions in my AD&D 2e days. Opinions differ widely on the weapon mastery and skill rules, but personally I think the "prestige" classes (added in the Companion set) were one of the best additions. But the levels are the biggest challenge. Even at a level every few sessions it's hard to imagine getting all the way up to level 36 with a full party; it's much more of a retinue-type of adventure.

It's funny to see how relatively conservative the D&D game was between 1974 and 1991. Rules stick around in the RC that are totally familiar from OD&D, although sometimes with modifications. The wandering monster check, for instance, is up to once per two turns; the secret door rules are exactly the same. Listening rolls are little different. There are some more rules, but it would be fully recognizable if handed to someone who hadn't seen a book printed since 1974.

The other thing I like about the RC is how much character its monster list has. Skimming through it again, it has many of the iconic D&D monsters, and many that are peculiar to the "basic" line (giant weasel, thoul, fire beetle, living statue), but at the same time some is just odd like the mek or the hydrax. There's just enough here to keep players on their toes while in totally familiar ground, which seems to be the trend in the Rules Cyclopedia.

With the RC back in circulation, albeit electronically, I think there's a chance for some quality gaming. You just have to wonder - did WotC stop from reprinting it because with a printed Rules Cyclopedia, there's really no need for a "D&D Next"?
Posted by Wayne R. at 7:31 PM