It's Wednesday, so there's a new cryptozoological monster for Swords & Wizardry. Like last week, it's an American cryptid, this time from the East Coast in Dover, MA. 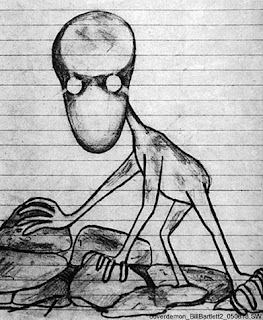 The Dover Demon is a small humanoid, with a peach skin tone. It is totally hairless and lacks a nose, mouth, or ears; the only interruption in its smooth skin is the eyes. These are green and glow visibly in the night. Its hands and feet are equally long and spindly, and it grabs and climbs readily, the extremities adapting to rocks with ease.

Most of the time, such a demon is interested in following and frightening humans, slipping away unseen. At night or in poor lighting, the demon's body can become almost translucent, leaving only its eyes visible. It does not speak any language and is not interested in eating, though it will be attracted to magic items. If it can corner a solitary human, it will use its sleep attack and subject the victim to a painful examination, leaving before they wake. Only one demon will be encountered at any time.

If attacked, it will counterattack with a powerful mental assault. This requires a saving throw (vs. spells if modifiers are applicable) and it can stun an opponent for 1d6 rounds, or put them to sleep (as per the spell) for 2d6 turns. Against magic-users only, the demon may attempt to cause the M-U to go incurably insane (same parameters apply).
Posted by Wayne R. at 10:04 AM