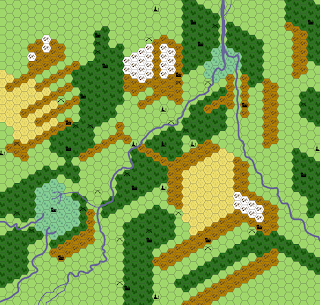 In thinking a bit about the OD&D setting, I think it implies a very different structure from how much of Dungeons & Dragons has been played.

Whether it's a knight in his castle, a wizard in a tower, a cleric in his temple, or a wandering encounter version, there is assumed to be a retinue about the NPC. Two things are noteworthy here. First, the retinue is usually made up of characters significantly lower in level than the main character. Second, player characters are pretty much assumed to take up the same formation. The barony and specialist / man-at-arms rules more or less encourage this style of play: once you have your own stronghold, you turn it around and start recruiting.

The party seems to have come about because of the conditions of play. Rather than large groups of wargamers where individuals cycled in and out of play regularly, D&D became a game played among small circles of friends, starting in the pre-teen years and going up through high school. In that period, the party makes sense because people that age typically form such tight-knit groups for their social activity.

I've always found that play gets better at high levels with fewer high-level PCs, and I think much of the grousing (particularly about the impact of high-level wizards) is based on stretching the party model much further than it is meant to go. Party-based play makes sense in D&D when you are low level; at that point it's primarily a numbers game, and you're better off stacking the deck in your favor. But after 7th or 8th level, it's just not as interesting - which is precisely when the original game's rules move on to the more complex "endgame."

One reason I like this approach is that it feels much more "Appendix N." D&D doesn't do solitary heroes well at lower levels, but once a PC reaches a certain point, they have gained the ability to do it, with support from their sidekick(s) as necessary. This is much closer to your literary swords & sorcery; even Fafhrd and the Gray Mouser are two people, not a balanced "party." Most of the time, each PC will have their own agenda and be off doing things that take up a lot of their own time.

This model still allows for scenarios where players do assemble a whole bunch of high-powered PCs (and NPCs) to go off against some suitably large threat - but it's not the usual modus vivendi of the PCs.
Posted by Wayne R. at 5:01 PM