It's been seven days since I wrote up a cryptid for Swords & Wizardry. So without further ado, one of the better pure monsters in the field. 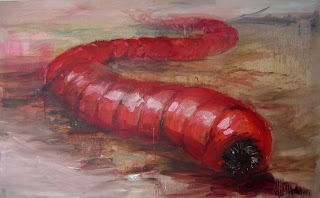 An Olgoi-Khorkhoi is a bright red worm varying from 2' to 4' in length. It has no head, only a gaping maw that drips venom. Most of the life of these creatures is spent burrowed in sandy or rocky soil, only coming out to hunt a few times a year. Its preferred target are camels and pack animals in general, which they use to lay their eggs, but they will attack humans.

A 2' worm will have 4 HD, 3' having 5 HD and 4' with 6 HD. The death worm has an electric shock that it can use once per day; this is a lightning bolt for a number of d6 equal to its hit dice. If encountered at a distance the olgoi-khorkhoi will always use its shock as a first weapon. Subsequently, it can spit venom up to 5'. On a successful hit, a target must save versus poison or die. If this is unsuccessful, there is a 1 in 6 chance that a character in metal armor is hit by the spray. This will corrode the armor beyond use.

The body of the olgoi-khorkoi is entirely venomous and corrosive. If a metal weapon is used against the death worm, there is a 3 in 6 chance of it being affected and corroded beyond use after the combat (subtract any bonus on a magic weapon from this chance). Any character touching the skin of the death worm must make a saving throw versus poison at +2 or die. Both dangers continue to exist after the creature itself dies.