Slowing the Pace (But Not to a Grind) 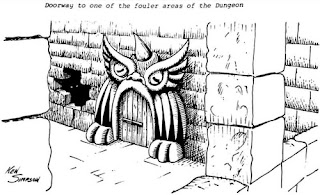 A slow dungeon level, in my classification, is one where PCs spend prolonged periods of time getting through the level. These are really the "meat" of the dungeon, where monsters are fought and treasures found.

Unlike a fast level, there are really only two elements to making a proper old-school D&D dungeon level "slow." The first is the expectation that there is treasure; the second is that there are obstacles preventing characters from getting to the expected treasure.

If you just dump a set of PCs off in an unknown, inky black darkness - that's putting them in a slow dungeon level. They are there under the unspoken presumption that there will be treasure to be had. This means that slow levels are, in a way, the default for dungeons. That's why I say the expectation of treasure is the main factor here: if PCs go about exploring they are doing so because they think there is some reward for it.

Managing these expectations is up to the referee. Treasure maps will do it, as will well-crafted rumors in town; even subtle hints in the architecture indicating a place that players will think are "secure" will lead them to think that this is where the treasure is.

The real trick with slow levels is making it hard. If you had a room full of rubies and it was easy to get to, it would already be emptied. The rubies might be in a secret compartment, or a dragon might be sleeping on top of them, or they might be in one of a thousand rooms of a twisting labyrinth - or any of the thousands of elements that make a dungeon interesting.

A slow level's pace is determined by the obstacles relative to treasure. Varying numbers and hit dice of monsters are the easiest dial to turn to make a level slower or faster; too many and it becomes a grind, too few and it can be a cakewalk. Older D&D's combat system comes into play here, as simply peopling a dungeon with a lot of small groups of "level-appropriate" monsters - which I think, because of modules like B2 Keep on the Borderlands, is rather common - easily turn into grinds.

Making larger groups of level-appropriate monsters, and encounters with (sometimes wildly) higher-level monsters, is a better way to encourage exploration and innovation instead of grinding. If there are 60 goblins between two rooms, the challenge becomes about circumventing or dealing with them rather than simply wading in and going for the slaughter. Of course, this assumes that the dungeon is properly Jaquayed so there is a way around.

Room spacing with empty rooms and navigational difficulties are other classic ways to keep a slow level from bogging down into a grind or a TPK. In the original D&D, Gygax clearly was using these as his primary sorts of traps, rather than the types we're familiar with (poison, arrow, pit etc). It makes a lot of sense from a dungeon design standpoint.

Finally I think that really great enigmas help make for a good slow level. If there's a device or machine on the level and the question is how to operate it, that gives a positive motivation for the players beyond the simple treasure - although presumably solving the enigma will have some impact on the PCs' goals. Likewise, a good themed level or sub-level will let you slow things down without resorting to dozens of monster encounters, such as a sub-level populated with creatures from Barsoom or a level overrun with sentient plants.

I think that a really great dungeon is one where the slow levels are interesting on their own terms, and craft challenges that players really have to struggle to adapt to. So these levels will be the most challenging part of designing any dungeon.
Posted by Wayne R. at 1:18 PM