On Goblins and Gnomes 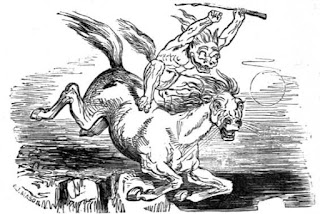 I was looking at some 19th century sources on goblins and fairies (basically the same thing) because Gus L's takedown of The Lost Mine of Phandelver at Dungeon of Signs is so harsh on goblins. I was trying to find some material for a different take on the goblin, when something hit me.

Open any classic D&D book, from Holmes on to the Rules Cyclopedia, or open the Monster Manual for 1e AD&D. Look at Goblins. Now look one entry back (in the MM, just skip the entry for "GOAT, Giant"). That entry will be Gnomes. Every single number for Gnomes and Goblins will be within 1 point of the other. Gnomes have AC 5, Goblins have AC 6. Gnomes have 1 HD, Goblins 1-1 HD. In Moldvay and later versions of classic D&D, Gnomes have 8 Morale and Goblins have 7 Morale. In AD&D, Gnomes speak the Goblin language. In each version, we find that they even have similar (though not identical) leaders, even with similar morale boosting effects in Moldvay. Not to mention, they are both chthonic humanoids somewhere between 3' and 4½' tall.

The implication should be clear: these are the same monster.

I mean, what real differences are there? Gnomes have beards? Goblins are a bit uglier? Alignment? A point of AC and a single hit point? A point of morale? Gnomes are fond of crossbows? All that is minor details. Goblins and gnomes are more like each other than they are like other monsters. More important, it gives things an interesting hook. It's simple to merge the two and differentiate them by alignment and disposition. Goblins are now like gnomes but Chaotic or Lawful Evil in alignment. You can even keep the terms "goblin" and "gnome" and the respective languages.

I picture the merged creatures as favoring classical gnomes. The evil "goblin" versions may be uglier because of association with Chaos, or because they live in the Dungeon-as-Mythic-Underworld, but they should look basically similar. Since goblins have an antipathy to dwarves, perhaps they don't keep beards, but I think visual cues should be subtle to make the merger meaningful.

Twentieth century fantasy literature drew extensively on the fairy tales collected in the 19th century. These were far from precise in terminology. "Goblin" is one of several catch-all terms that referred to pretty much any of the diminutive, chthonic creatures, whether we are referring to mine spirits such as the Welsh Coblynau or domestic brownies. "Gnome" isn't any different. The idea that gnomes are somehow separate is an invention of Gygax.

Once you recognize that goblins and gnomes are the same monster in D&D, a few things happen. First, the dynamic of encounters with short humanoids will be different. Just because a creature is about 3½' tall, doesn't mean that it is always good or evil. This creates an ambiguity that games with short humanoids otherwise lack: you can no longer tell at a glance whether a creature is a friend or foe.

Second, the idea that gnomes have an affinity for illusions is a natural fit for goblins. It's a downright nasty twist to add goblin spellcasters with access to Phantasmal Force. A goblin lair is a dangerous place, and adding illusions can give them some bite. It becomes a place where you cannot trust anything, which adds a distinct layer of classical fairy lore. If the idea doesn't appeal to you on its own, watch Jim Henson's film Labyrinth.

Third, it justifies the existence of gnomes. As written, there's no reason to ever use gnomes. You can always do the same thing with dwarves or halflings, and do it better. But once you make gnomes and goblins the same monster, there's a reason to put them in a dungeon. Neutral gnomes/goblins are a great faction to add to the dungeon mix, with just enough potential for nastiness to make them interesting.

Fourth, there is a great amount of 19th century folklore that works with this view of goblins/gnomes as chthonic fairies. For instance, British Goblins by Wirt Sikes is a good guide to Welsh fairy lore, and the merged creatures that we get from goblins and gnomes can fit a lot of the stories within. The Coblynau (Welsh mine-spirits) are one of several examples of creatures that can be used as inspiration for gnomes. The pranks and demands of British goblins are good ways to make goblins more than one-dimensional bags of HP to be killed.

I think this is a simple solution to a dilemma that I've seen in OSR circles for years now. There is a need for straightforward dungeon factions in the best tradition of B2 Keep on the Borderlands. But after 40 years of the goblin being abused as an entry-level monster, there is some understandable goblin fatigue. This brings them close to their folkloric roots and I think changes the way things work without losing an iconic monster to overuse.
Posted by Wayne R. at 5:14 PM