Weirding Up Your Elves 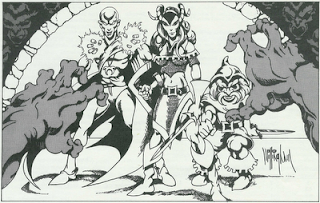 Jeff Rients said on G+ yesterday: "ELVES GROW HORNS AT FOURTH LEVEL." This was a reference to the illustration by Bill Willingham above, which shows a character who just might have horns. (It's always possible that she is wearing a horned helmet but that's just not as fun.) This appeared on the first page of the Expert Set, which provoked Rients's observation: in the Basic Set they have pointy ears but in the Expert Set (levels 4+) there are horned characters. And it's had me thinking.

The problem with elves is that so many damn variants on the same basic idea have been done. Celtic myth, Scandinavian myth, and various fictional sources have all been mined to hell and back. Elves out of Tolkien, elves out of Poul Anderson's The Broken Sword, elves in Runequest are considered plants.

I'm thinking that elves might be something different still. I've been developing this concept of Faerie, a place that is the utterly weird home of the beings like those from folklore and Shakespeare's A Midsummer Night's Dream. It is something of a wonderland that has its own rules, a shifting landscape, utter beauty and extreme dangers often side by side. And more and more I've wanted elves to be connected to that realm.

I think Jeff's concept of elves who get weirder each level meshes very well with this. Elves start out nearly human; I'm tempted to say that either elves or half-elves are actually changelings, left for humans to raise. They are short, though, and by learning a single spell their ears change into the pointy elf ears that we all know. Gaining further levels in a magic-using class (whether as a Fighter/Magic-User multiclass, straight up M-U or a B/X style Elf class) takes them a step further from ordinary humans.

Sometimes the signs are odd abilities: perhaps elves gain the ability to see other colors of light, or some of their characteristic abilities like immunity to sleep and charm spells and ghoul paralysis. Elves who travel in dungeons gain the ability to know, not through keen eyesight but through a weird connection with the dungeon, where a secret door is located. Perhaps at higher levels they become more synchronized with the underworld, able to sense its rhythms and know if a monster is around a corner, or are able to open stuck doors without an Open Doors check.

Periodically this comes out as a physical phenomenon - the elf grows horns, or vestigial wings (perhaps at a higher level they become functional), or their feet fuse into cloven hoofs. Other elves become achingly beautiful (increase in Charisma, perhaps) and project an aura of awe that makes low-HD monsters check versus morale or flee. Ultimately they make the trip back to Faerie, no longer fit for the mortal world.

The other facet of all this is that I listed this entry under the "monster" tag intentionally. I think elves, especially at higher levels as they become more like the fae, can make for excellent encounters. They are haughty but beautiful, strange and defend points of honor that are incomprehensible to mortals. They consider PC elves to be "impure," tainted by living among humans. Not necessarily a combat encounter, but possibly one that will have some confrontation in it.
Posted by Wayne R. at 1:28 PM