Some More Thoughts on Stonehell

Some points after a second session.

1. One of the strengths of the dungeon is the way the factions are laid out. I particularly love the kobolds, who have started to get tired of the PCs leaving dead orcs all over the dungeon. Stonehell's kobolds are pretty much dungeon janitors, which is just fun. One got a bit short tempered and offered to let the PC dwarf, Tybar Thunderaxe, test the trap they were working on. The NPC dwarves are also great, I rolled them again on a wandering monster check. Snorri Broadshoulders is offended that the orcs thought he was allied with Tybar.

2. The party has survived pretty well, largely because they haven't been attacking giant rats, fire beetles or kobolds when they're encountered. Of course that means that they aren't searching those rooms, but it's an interesting trade-off.

3. I may have to sub out the crypt contents chart for the one I used in Dungeon Crawl #2. Level 1B is a bit of a grind.

Overall I'm still really enjoying Stonehell. I'm thinking that things are going to change more as they get further down, both with the existing factions and one or two new twists I intend to introduce. (Not to mention some large-scale reworking in some of the lower floors.)

Side note: ever since I was in high school, I've had a set of these dice from the Middle-Earth card game in the '90s. One of them is always my wandering monster die. 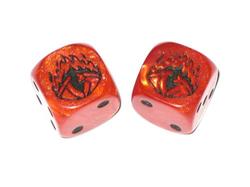