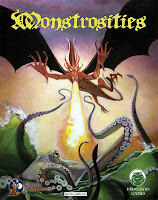 With the hype of Swords & Wizardry Appreciation Day this past Wednesday, one of my purchases was the 500+ page tome Monstrosities. I received the book in the mail today and have started to look it over.

Monstrosities is the second S&W monster book - the first came out a few years ago. It had a high number of monsters in a low page count, and was set off by not having a ton of illustrations. Monstrosities is different: it devotes a full page to each entry and provides an illustration and a sample encounter for every one of its 500+ monsters. Its heft means that it could be used pretty handily to off a first-level magic-user.

The creatures in Monstrosities are a good mix of OGC monsters and new monsters; the new entries are marked with the name of their author. Matt Finch has his share, and it includes some of his signature monsters like tunnel prawns* and shrooms (though oddly not the Pod-Men from Pod-Caverns of the Sinister Shroom). There are also some great oddities - I noticed that Scott Casper's "Mechanism, Giant Robot" is everything I could've dreamed of in a D&D-clone giant robot. The mini-encounters are mostly well written, mostly appropriate for a hex crawl, and strung together would make a modestly interesting implied setting. My favorite so far is the kobolds, who ride atop a giant snapping turtle through the Sin Mire swamp.

A few gags are scattered through this lengthy tome. Much like in the 2e Monstrous Manual, the Invisible Stalker entry is accompanied by a plain white box instead of an illustration. There are not one but two entries for the grue and there are things that are just odd like the "toadawan masters," enlightened toad-men with hallucinogenic skin. I'm not sure what's going on there, but I'm tempted to have it speak like Yoda.

Overall the book's production is quality, the binding is good (important on a mammoth tome like this) and the art mostly shows up well. The one gripe I have is that there's a good deal of white space in the book, and not all in the good layout sense. Many of the entries are extremely short - the illustrations take up a bit more than a quarter of a page, and in some of the monster entries the text is considerably smaller. So the 2-page spread for "Goat, Giant" and "Goblin" has more white space than space taken up by text. The aggressively minimalist descriptions that make the core Swords & Wizardry Complete book work are a hindrance in Monstrosities. The book doesn't need a ton of filler, but even adding a paragraph to describe common monster tactics in combat would've been appreciated given the premium price (cover is $49.99, although Noble Knight has it for less, and includes PDF).

Despite that complaint, this is simply an indispensable tome for a referee running old-school D&D or any of its simulacra. It's a one-stop shop for hundreds of monsters both obscure and common, and provides at least one thoughtful idea about each monster. It's very much worth the price, especially if you get the PDF.

* Tunnel prawns are a great answer for the question, "what do they eat in the dungeon?" Why, tunnel prawn, of course! They've appeared in at least 3 monster books, including the OSRIC Monsters of Myth and both S&W monster books.
Posted by Wayne R. at 3:40 PM